How many Beatrix Potter 50p coins are there?

The first Beatrix Potter 50p coins were released in 2016 to mark 150 years since the famous writer and illustrator's birth. This first issue consisted of the following coins: 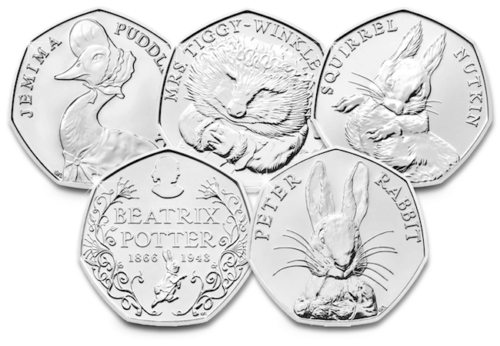 In 2018 the series continued with the released of the following coins: 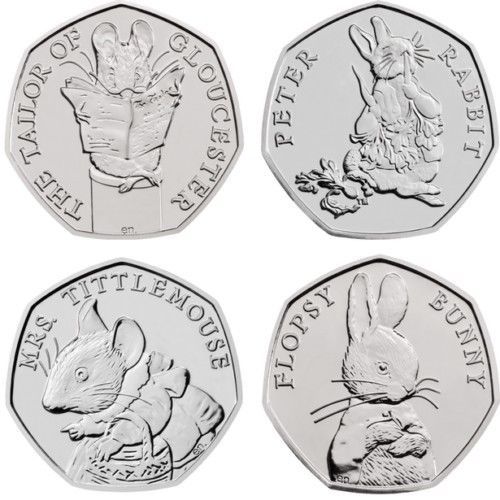 Which Beatrix Potter coins are the most valuable?

According to our friends at Change Checker, the most scarce Beatrix Potter 50p is the 2016 Jemima Puddle-Duck coin, which is rated as the third rarest 50p coin in circulation (behind the 2017 Sir Isaac Newton and the 2009 Kew Gardens coins) with a relatively low mintage of 2.1 million. The coin is no longer available from The Royal Mint and examples can be bought for between £10 and £20 on ebay.

The second scarcest coin is the 2016 Squirrel Nutkin, with a mintage figure of 5 million. This coin can be bought for around £3.50 on ebay.

The mintage of the other Beatrix Potter coins is as follows:

So why are Beatrix Potter coins going for £100s on ebay?

There are different versions of new coins issued by The Royal Mint. The figures detailed above are for circulation coins - the examples that we find in our loose change. For each new coin, The Royal Mint issue a Silver Proof Coloured version, a Brilliant Uncirculated (BU) and the circulation copy.

Only 15,000 copies of the 2016 Peter Rabbit Silver Proof Coloured 50p coin were released and they quickly sold out, with The Royal Mint website crashing due to the huge demand.

This means the coloured version - not actually a circulation coin, it wouldn't be accepted in shops - is now worth around £400.

The coloured versions of the 2017 coins can be bought for £125 each from sites such as The Westminster Collection. The 2018 Silver Proof Coloured versions are priced at £60 each. But since there are limited numbers of these special edition coins, they are likely to go up in value in the years to come.

Buyer beware! Examples with a 'professionally made sticker' are being offered on ebay - these coins are not the official Silver Proof Coloured 50p coins, but just feature a coloured sticker over the original design.

Brilliant Uncirculated (BU) versions of the coin feature a pristine finish (and usually sold in special packaging to retain their condition) that isn't seen on the circulated coins. Yet generally speaking they are only marginally more valuable than the examples we find in our loose change.

You can purchase Brilliant Uncirculated versions of the 2018 coins for £10 from The Royal Mint website, whilst The Westminster Collection offers versions for as little as £3.99.

What should I do if I find a Beatrix Potter coin?

If you find a Beatrix Potter coin in your change why not keep it and complete the collection? It's unlikely your coin will fetch £100s or £1,000s on ebay, but the coins make for a lovely collection and there are a variety of different folders available to store and display the coins.

In future years the lower mintage coins will gain value, and the Jemima Puddle-Duck 50p is definitely the one to look our for, so keep an eye on your change and enjoy the thrill of the hunt. It's no longer just that nasty Mr McGregor that's searching high and low for Peter Rabbit!