The British coins aboard the Ship of Gold 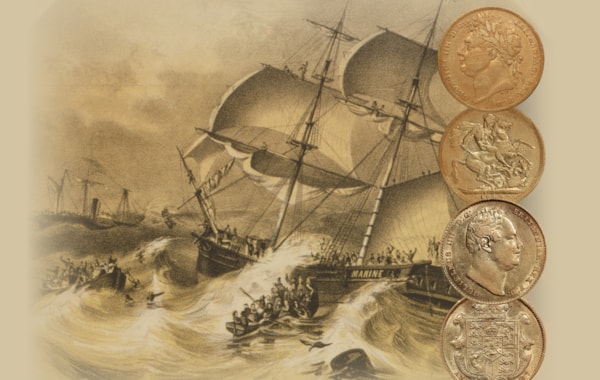 It took over 160 years for the fabled ‘Ship of Gold,’ the SS Central America, to reveal its fabulous 19th-century trove of sunken treasure, writes Donn Pearlman, as he provides an insight into the rare gold coins found beneath the waves

The treasure discovered amidst the wreck of the SS Central America contained 41 English gold coins, including some preserved in mint condition.

Researchers were also surprised, and delighted, to discover two rare Australian Sovereigns in the treasure, one of them the finest known of its kind. All of the coins are going from treasure ship to auction sales.

Each coin has a story to tell.

After leaving England, perhaps in the possession of prospective prospectors lured to the United States because of the great California Gold Rush that began in 1848, the journeys of the Great Britain coins included:

Nine days after sailing from Panama, the SS Central America sank. Her distinguished Captain, Commander William Lewis Herndon, the crew and passengers tragically encountered but could not overcome an intense, days-long hurricane of high seas and winds of up to 170 km/h.

After going down on the ship, those historic coins spent more than a century and a half on the bottom of the Atlantic.

The English and Australian coins were hauled from the seabed debris field more than 2,200 metres below the ocean’s surface in 2014 along with thousands of other recovered coins and dozens of gold bars.

Everything was then carefully packed in plastic tubes and sealed in large containers. Four years after being retrieved from the treasure ship site, the coins were finally curated and catalogued in a small examination lab at Professional Coin Grading Service (www.PCGS.com).

Another expedition to the SS Central America site was successfully completed in 2014 to recover more of the historic treasure, including the ship purser’s safe and its contents. However, another subsequent dispute over ownership kept everything in limbo until January 2018.

The vast majority of the more than 3,000 gold and 12,000 silver coins recovered in 2014 were struck in the United States, but 82 of the retrieved gold coins are from ten other countries, including 41 from Great Britain.

Four of the Great Britain gold coins from the 19th century are in mint condition and considered to be among the finest known examples of their date and type, according to Dwight Manley, managing partner of the California Gold Marketing Group.

Why were there British coins on board?

‘This is truly an international discovery. It is fascinating to think about how all these coins came together to become part of this fabulous sunken treasure. People from around the world travelled to the San Francisco area in the 1850’s because of the California Gold Rush. Were these coins originally carried by miners from England seeking their gold rush fortune or acquired as winnings in a gold mining camp poker game?,’ said Manley.

All the gold coins have been authenticated and certified by Professional Coin Grading Service. Each of the PCGS-certified coins now is encapsulated in specially-produced and labelled holders that contain a pinch of recovered SS Central America gold dust in a separate compartment. The insert label includes a statement of authenticity hand-signed by Evans.