US Mint and Royal Mint collaborate on Mayflower anniversary coins 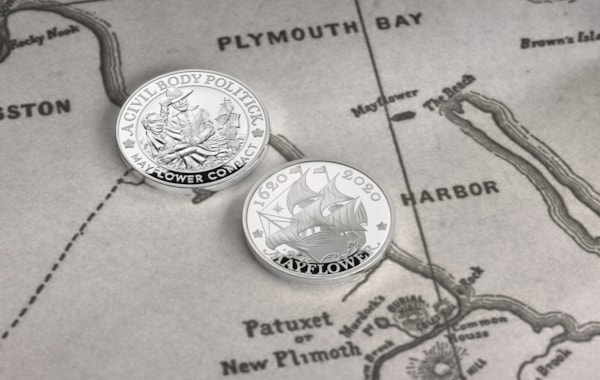 The United States Mint and Britain's Royal Mint have worked together to create two limited-edition sets marking the 400th anniversary of the Mayflower voyage.

The United States Mint and The Royal Mint have produced a joint two-coin gold proof set and a silver coin and medal proof set. The coin and medal designs tell the story of the Pilgrims, the Mayflower‘s journey, and the impact the Pilgrims’ arrival had on the native Wampanoag people.

The reverse of the UK coins and the US coin and medal contained in the sets were designed by Chris Costello, who used 'multiple stylistic elements' to tie them together. These include the choice of font and North Star on the UK coin, which connects to the image of the sun in the US coin, symbolizing a new day. That symbolism is also a reference to the Wampanoag people who inhabited the region, and were known as the “People of the Dawn.”

Keep updated with the latest coins issued around the world with the All About Coins newsletter.
SIGN UP TODAY - IT'S FREE!

“These designs are yet another chapter in the long history of the United States Mint’s commitment to producing stunning medallic art. These sets are tangible representations of our longstanding friendship and alliance with Britain.”

“We are delighted to have created two unique sets which commemorate such a pivotal moment in our combined history. Chris Costello has beautifully retold the Mayflower story through numismatic art, while also highlighting important themes which continue to resonate with us in the UK and US today.”

The British and American coin designs come together to tell the story of the departure and arrival of the Mayflower. The story begins on the obverse of the British coin depicting Queen Elizabeth II and the Monarchy.

The reverse depicts a dynamic and exciting image of the Mayflower in the early stages of the voyage, guided by the North Star, carrying the hopes and dreams of the Pilgrims and their life in the New World.

The story then continued on the obverse of the U.S. gold coin depicting a Wampanoag family watching from their world as the Mayflower arrives from foreign shores.