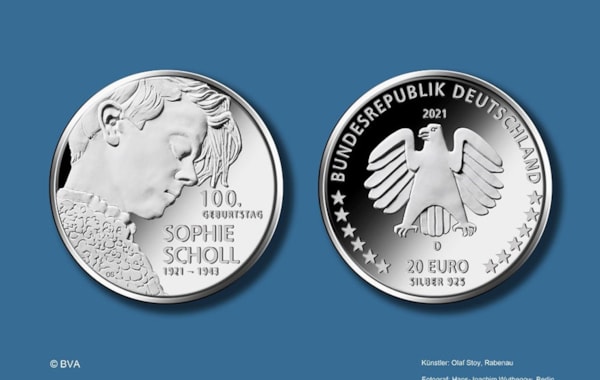 Germany are set to honour German resistance fighter Sophie Scholl, on what would have been her 100th birthday, with a €20 collectors coin to be issued in April 2021.

Sophie Scholl was a German student and Second World War political activist who joined the White Rose movement which published anti-Nazi pamphlets; she was arrested for distributing literature to fellow students and was sentenced to death in 1943.

According to the book Women heroes of World War II by Kathryn Atwood, a copy of Scholl's leaflet was smuggled out of Germany, obtained by Allied Forces and reprinted, with millions of copies being dropped over Germany by plane.

Since the 1970s, Scholl has become a symbol of anti-Nazi resistance and a role model for the fight against lack of freedom and oppression.

The coin is made of sterling silver (Ag 925) and two versions will be available, in stamp gloss and mirror gloss, the latter version set to be sold above the face value, and exact pricing to be announced next year.

The design of the coin features a portrait of Sophie Scholl which, according to the Mint shows the student's 'intellectual independence, clarity and wisdom and the strength to adhere to her humanitarian principles even when her life is in dire danger. The artistic representation also makes their sensitivity visible and enables the viewer to develop empathy for themselves and for their actions.'

The value side shows an eagle, the words "BUNDESREPUBLIK DEUTSCHLAND", the value number and designation, the mint mark "D" of the Bavarian Main Mint, the year 2021 and the twelve European stars. In addition, the indication "SILVER 925" is embossed.