Thanks to the length and breadth of the Roman Empire, all collectors can own a Roman coin, but there are some examples that command huge prices at auction or are only found in museums, as our countdown of rare Roman coins reveals.

The 'EID MAR' (Ides of March) denarius has been described as 'undoubtedly the most historically important of all ancient coins'. Why? Put simply, the coin was issued to spread news of the assassination of Julius Caesar. No wonder the few examples that remain in private hands often grab the headlines at high profile coin auctions.

The coin's design shows a bust of Brutus and, on the reverse, two daggers either side of a pileus, a felt hat worn by freed slaves, suggesting Caesar's murder stopped his oppression of the people of the Empire.

The reign of Brutus ended with a knife similar to that seen on the coin, as he killed himself after a failed battle. The victors then recalled the coin and melted down many examples, making the coin even more scarce for today's collectors. 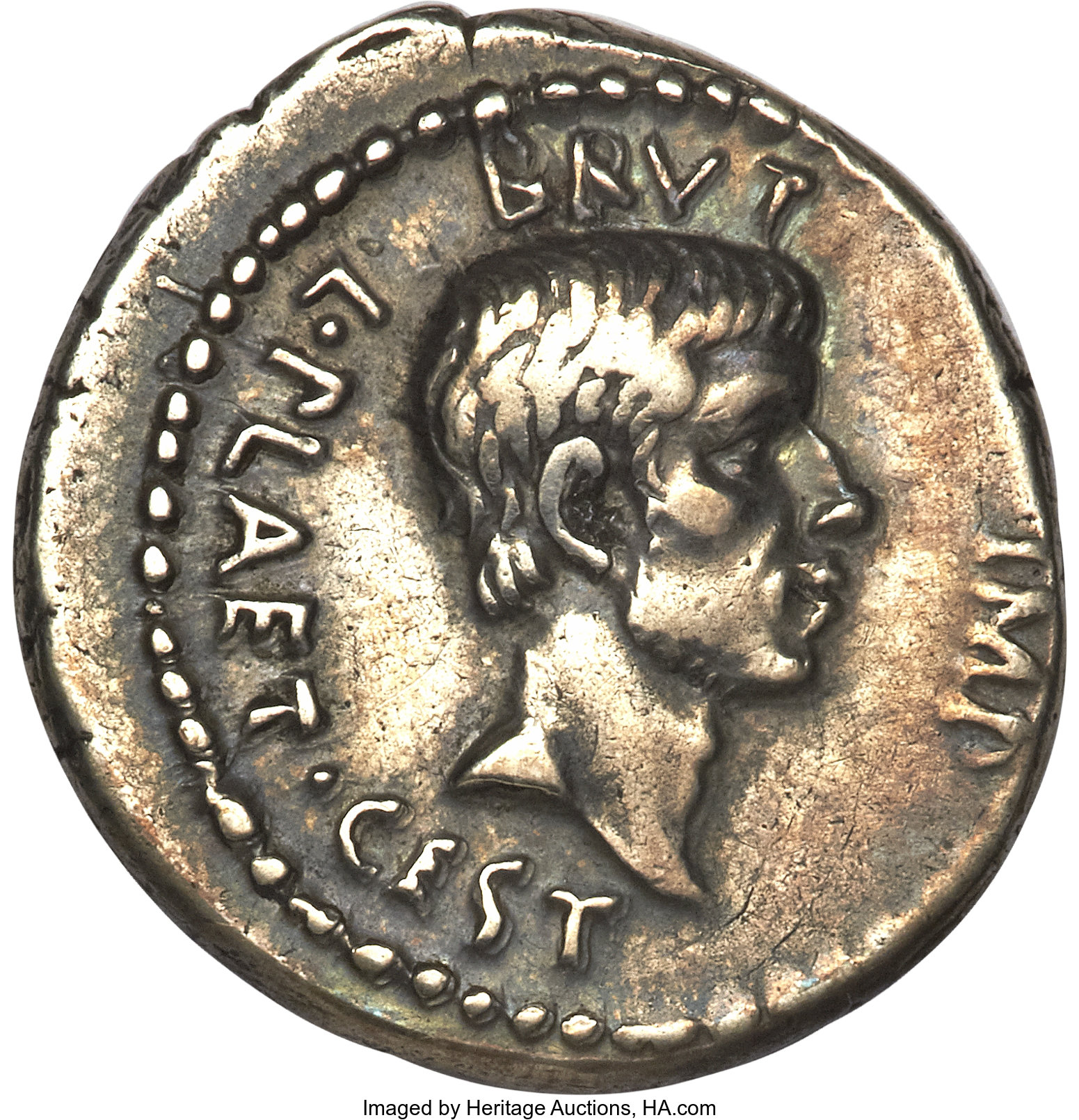 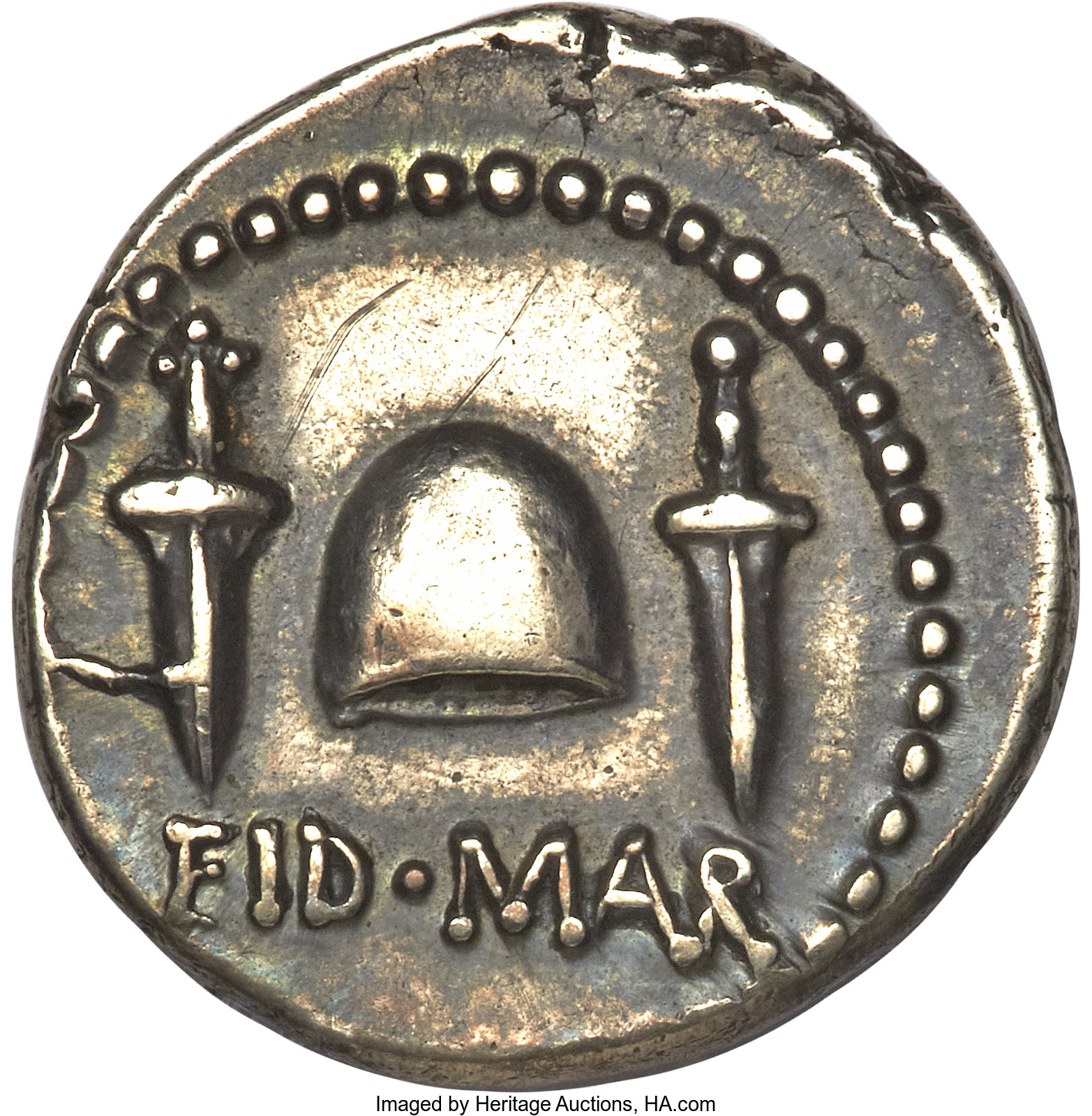 This example sold for $546,250 (approximately £393,619) in 2015 at a Heritage Auctions sale… but it was a gold version of the coin that grabbed the headlines in November 2020. The following 'Ides of March' coin sold at auction house Roma Numismatics for a staggering £2,700,000, the world record price paid for a Roman coin. 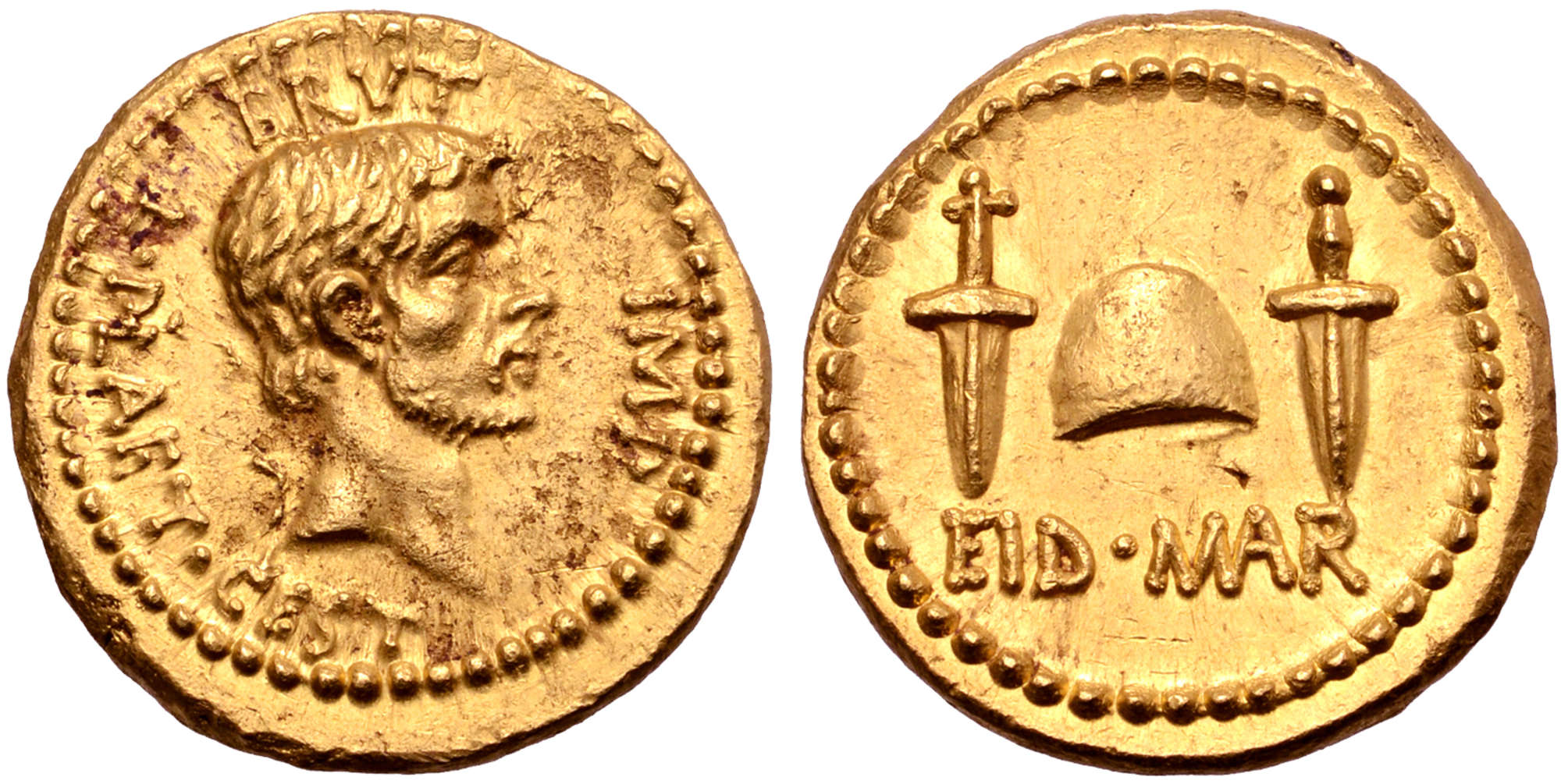 It was Mark Antony, a general who served under Caesar, that righted the wrongs of Brutus and melted down the famous EID MAR coin. He joined forces with Marcus Lepidus and Octavian (also known as Augustus) to rule the Roman Republic. Antony and Octavian are the subjects of our second Roman rarity.

The extremely fine coin was minted in 41 BC and featured a bare head portrait of M. Antony, with the bare Octavian head with slight beard on the reverse. The text 'CAESAR IMP. PONT' signifying that the coin was issued by an emperor related to Caesar himself, since Octavian (also known as Augustus) was the great nephew of Julius Caesar and his adoptive son. 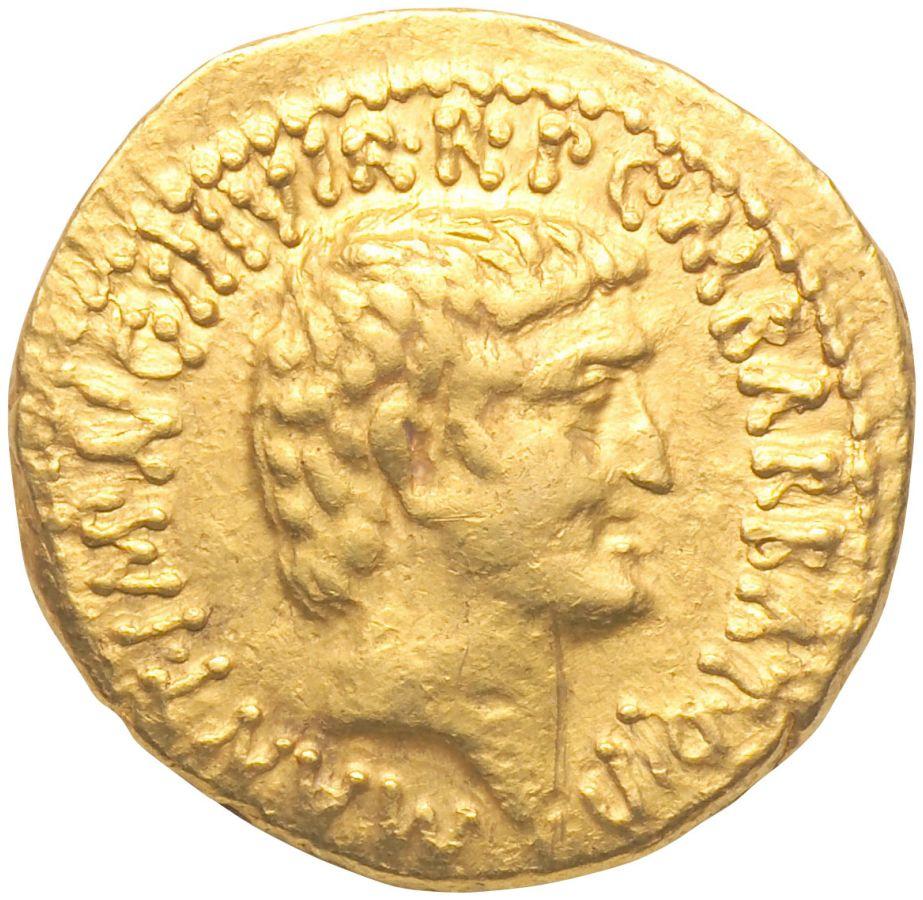 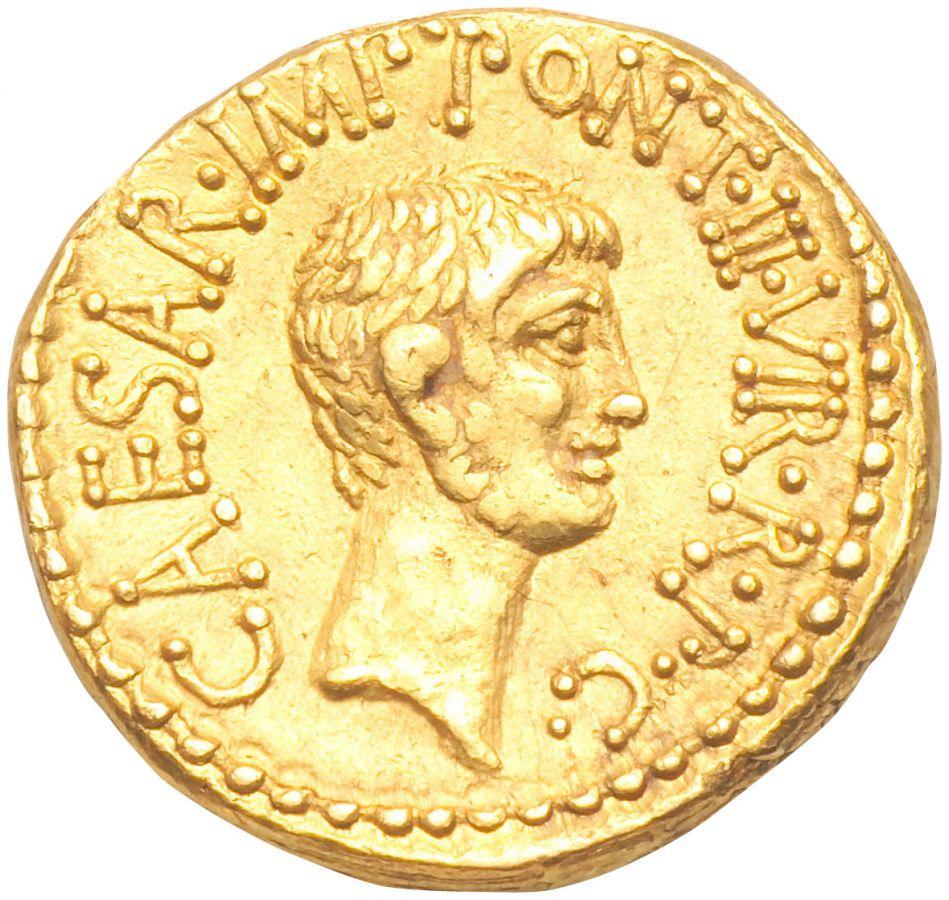 This Mark Antony and Octavian Aureus was sold by Stack's Bowers for just over £13,000. Which might seem like small change compared to the previous piece, and this next one…

Compare our next example to the very first coin in our selection and you can see how the striking of the coin is much more accurate here, our 'EID MAR' coin having an off-centre strike. One of the reasons for this difference is the period in which the coin was issued. Our Ides of march example was produced c.44 BC whilst this gold aurei medallion was minted in c. 308 AD, demonstrating how coin production techniques improved over the centuries. 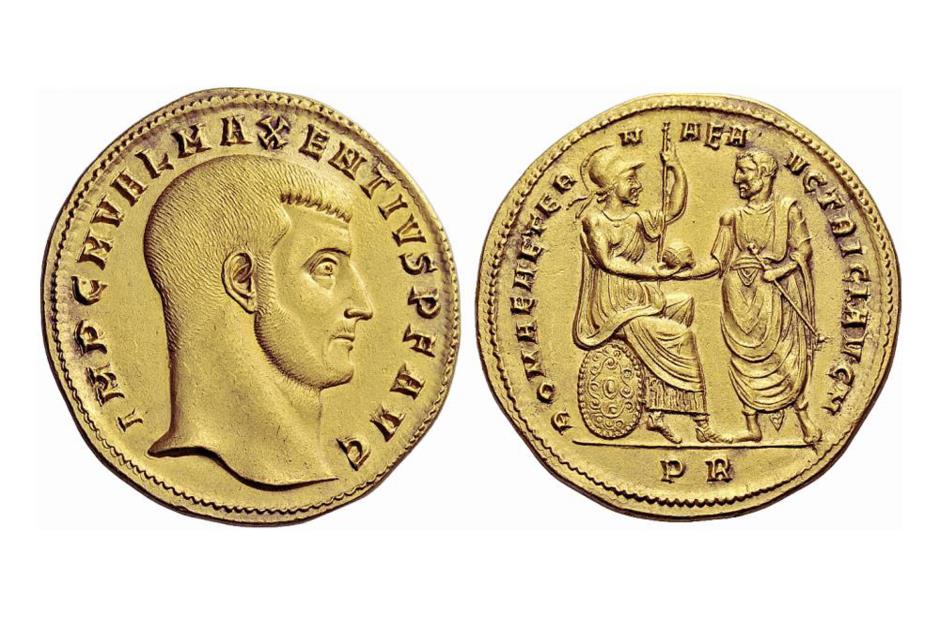 This medallion was sold by Numismatica Ars Classica in 2011 for just over £1 million. It shows Maxentius, who was Roman Emperor Roman emperor 306 to 312. He rose to power following the demise of Constantine, and later fought against him in bitter civil wars.

The coin's design aims to assert Maxentius' power and is one of just two examples known to exist.

The final coin in our Roman Rarities dream collection is a stunning sestertius of Hadrian, which was sold back in 2008 by Numismatica Genevensis for £1.8 million. 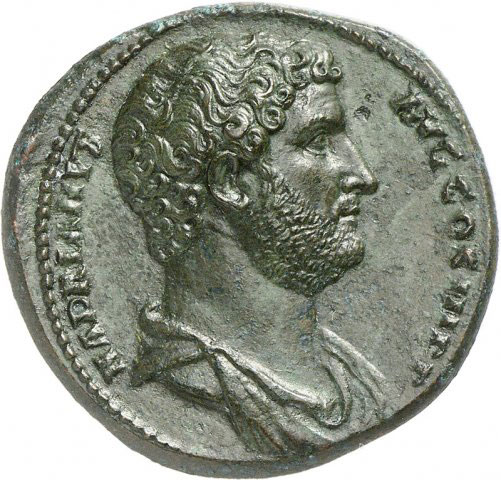 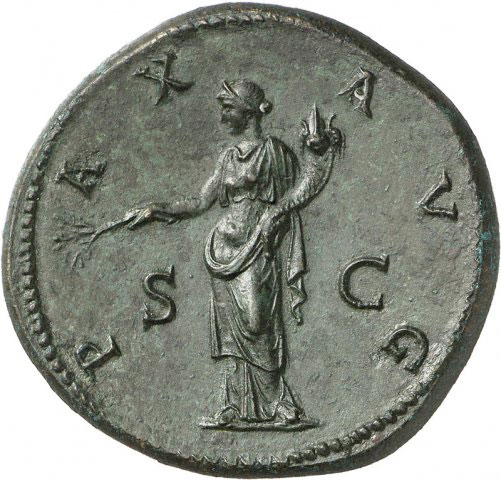 The coin was minted around 135 AD and the portrait of Hadrian is widely regarded as one of the best seen on any Roman coin. It is thought to have been produced by sculptor Antoninianus of Aphrodisias, and the reverse shows an image of Pax, the Roman goddess of Peace. This is thought to refer to Hadrian's involvement in the Bar Kokhba revolt.

It's another incredible piece of history, and whilst you might not be able to afford these examples, there are many Roman coins you can find to add to your collection, such is the scope with this fascinating, challenging period of world history.