The extremely rare banknote had been certified by Paper Money Guaranty (PMG) and realised a record-setting $456,000 in a sale presented by Heritage Auctions.

The 1928 $10,000 Federal Reserve Note (Kansas City) graded PMG 30 Very Fine nearly doubled its pre-auction estimate of $250,000. Only ten examples of the 1928 Series notes are known to have survived, including two in museums, according to Heritage. The rare piece is also the first of these notes known from the Kansas City District.

The price set a new record for a piece of Small Size US currency.

A new benchmark had just been established three months earlier by the "Del Monte" error note. That 1996 $20 Federal Reserve Note (St. Louis), graded PMG 64 Choice Uncirculated EPQ with an Obstructed Printing Error, realized $396,000 in another Heritage sale. Its nickname derives from a banana sticker that found its way onto the front of the note between printings.

“Heritage Auctions is always excited to offer trophy notes like this $10,000 note and the 'Del Monte' note. Industry-leading grading gives bidders added confidence. The assurances that PMG certification provides are integral to the value of iconic numismatic rarities.”

Another high-denomination note certified by PMG was the second-highest lot in the auction. 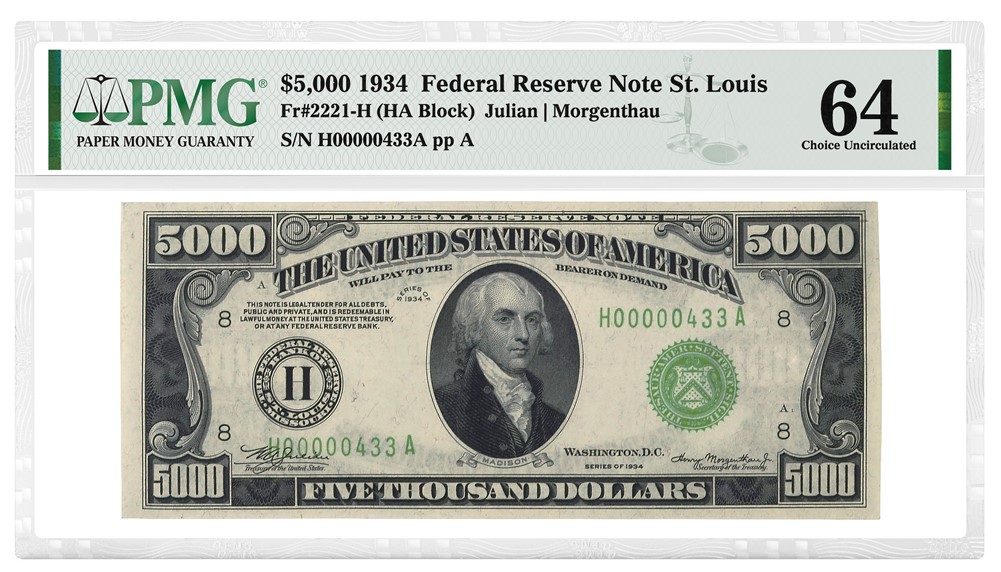 “PMG is thrilled to have certified so many of the world’s greatest paper money rarities. Given heightened interest in numismatics recently, I have no doubt we will see more PMG-certified banknotes setting records in the near future.”

Other PMG-certified highlights in the sale included: