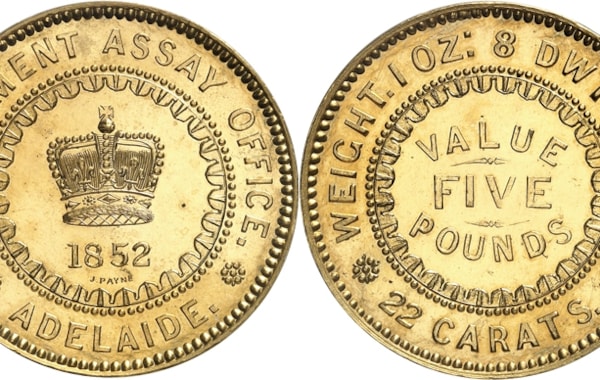 The recent auction at MDC Monaco featured an incredibly rare Australian £5 essay, described as a 'museum piece' and one of only seven minted, which fetched an incredible €800,000.

The seventh numismatic sale at MDC Monaco featured an array of coins from across the world, but it was one coin from Australia that stole the headlines, achieving a record-breaking price for an Australian coin at auction.

The Victoria £5 essay features a design created by Joshua Payne in 1852, and just seven copies of the coin were minted in 1921 using the original die.

South Australia was officially established as a British colony on the 28 December 1836 and it became an autonomous colony in 1856 with the ratification of a new constitution by the British parliament, with secret ballot and a two-chamber parliament.

In 1851, the discovery of gold sparked a gold rush and later engraver Joshua Payne produced designs for legal tender gold coins in values of 10 shillings, £1 and £5, but only the £1 coin was minted and used. In 1921, the Melbourne Mint struck seven dies of the £5 coin, modelled on Joshua Payne’s coin from 1852. Another die is known at the Victoria Museum in Melbourne.

A Victorian sovereign essay of 1856 was another highlight of the sale, fetching an impressive €110,000. Minted at the Sydney Mint, the coin was described as being 'the only and the finest copy in ULTRA CAMEO!'

Elsewhere in the sale Greek coins attracted great interest. The highlight, and featured on the catalogue cover, was an Aulerques Diablintes (2nd century BC) gold stater featuring a portrait of Apollo. The coin was desccribed as being an 'exceptional quality copy, with well-centred striking and particularly welcome reliefs. An exceptional currency. Superb.' 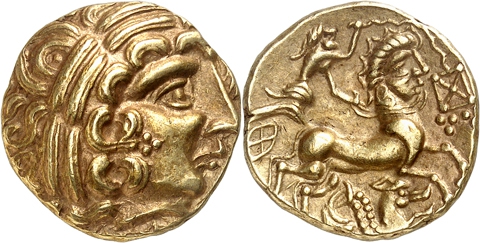