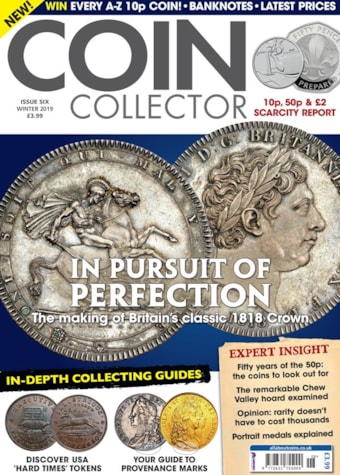 The Winter 2019 issue of Coin Collector is another packed issue, covering many different aspects of the wonderful hobby of numismatics.

Richard Kelleher of the Fitzwilliam Museum looks at counter-marked coins – pieces altered to create political comments and protests – including pieces created during the Peterloo Massacre and Boer War. Meanwhile, Dr Adrian Marsden concludes his revealing series on Roman counterfeits, this time focussing on imitations produced in the final years of Roman authority in Britain during the 4th centruy.

We also take a look at coins from the other side of the Atlantic, examining the fascinating ‘Hard Times Tokens’ produced during the 1830s and 1840s, and recounting the creation of the US silver dollar of 1921-35, which became known as the ‘Peace Dollar’. In a special report we take a look at an intriguing ‘coin graveyard’ in the USA, which holds thousands upon thousands of British coins.

Closer to home we provide a quick overview of the Angel coin, one of England’s most iconic coins, and bringing us up to date the experts at ChangeChecker provide another guide to collecting modern GB coins and the latest edition of the popular Scarcity Index, providing a guide to the most sought after 10p, 50p and £2 coins.

With an interview with the British Museum’s Iron Age and Roman Coin Hoards expert Eleanor Ghey, the latest new coins issued from around the world, auction results, news, and much more, the next issue of Coin Collector is another must-read!