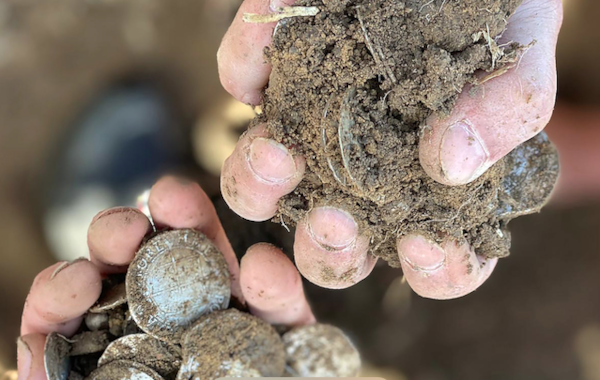 A metal detectorist has discovered a hoard of silver civil war era coins worth at least £100,000 in a field owned by his local pub.

Longtime detectorist Luke Mahoney found the 'biggest hoard' of his life just behind his local, using his Minelab Equinox 800 detector, he said he did it for the 'rush' and compared the thrill to catching a big fish.

The married father of three, who runs his own metal detector shop, Joan Allen Electrics. On 26 July he was out with two of his friends detecting in a field behind the Lindsey Rose pub after finally convincing the owner to let him search there.

The 15-acre field in which they found the coins had been recently cropped and a plough had somehow managed to crack a clay earthenware pot buried 2ft beneath the ground.

"We went into the field at about ten o’clock. We did some detecting in the morning and found a beautiful gold coin and a little sixpence and then we went and had lunch at the pub. We went back out to the fields and almost immediately I hit this signal and I pulled out this Charles I coin. Then I hit another signal, and another.

"They were everywhere. It was pandemonium. After ten minutes of searching I hit this massive signal and I thought ‘this is it’. We dug and saw the pot. That feeling of scraping the dirt away and seeing the coins is indescribable."

Mr Mahoney immediately contacted the local 'Finds liaison officer' and notified him of the find. He also declared the treasure to the coroner.

The hoard consisted of 1,061 silver, hammered coins dating back to somewhere in the 15th to the 17th century. Local historians suggest the coins were buried in the field by a wealthy landowner who had gone off the fight in the English Civil War.

Valuation expert Nigel Mills, from auction house Dix Noonan Webb, examined some of the coins found and said the hoard would fetch at least £100,000 at auction. He said the earliest coin was a Elizabeth I era shilling dating back to 1573-78. The find also contained many Charles I half crown's from 1641-43. Each Charles I coin would be worth around £50-75 but Mr Mills said they would be worth a lot more if they were linked to famous historic events.

Luke now plans to find something of even greater historical value and urged people to take up his beloved hobby. If you think you have a bit of Indiana Jones in you - you should do it," he added.

Michelle Meyers, Vice-President of Global Marketing from Minelab, the makers of the metal detector said: “When we found out about his discovery last week, we knew he was onto something. He told us he’d be using one of our metal detectors and the whole Minelab team were thrilled for him, we know what an incredible feeling unearthing a find like this is.

“Luke is a seasoned metal detectorist and knows what to do but we immediately offered our help in making sure he had access to the proper authorities in the UK. Starting your journey to becoming a metal detecting enthusiast is very easy and very rewarding but you must follow the laws in your own country. In the UK that means abiding by the Treasure Act 1996 and reporting all finds."

Don't miss a thing! Sign up for the allaboutcoins newsletter…

Receive coin collecting updates and information straight to your inbox with the allaboutcoins newsletter. It's FREE! Sign up today.