Year of the Rat: new coins from Royal Australian Mint 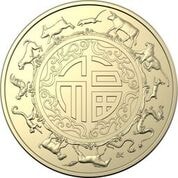 To mark the first sign of the Chinese lunar zodiac, the Royal Australian Mint has released a Year of the Rat coin collection and launched a competition to win a limited edition gold proof domed coin.

The coins celebrate the 2020 Year of the Rat, the first sign of the Chinese lunar zodiac and the start of the twelve-year lunar calendar cycle. The coins are a special tribute to the clever, outgoing and sensitive people who will be born under the first sign of Sheng Xiao, the Chinese Zodiac. For people born in the Year of the Rat, the number 2 is believed to be lucky - so 2020 is a particularly fortunate year.

In the new collection, designs featured on the coins include the sharp-witted Rat surrounded by the lucky lychee, the symbol Fu meaning happiness and the lunar calendar wheel, which reflects the traditional story of the race between the twelve animals of the Chinese zodiac.

According to Chinese tradition, the Emperor of Heaven challenged the animals to a race. The smart, persuasive Rat hitched a ride with the Ox and won the honour of being the first sign of the twelve-year lunar calendar.