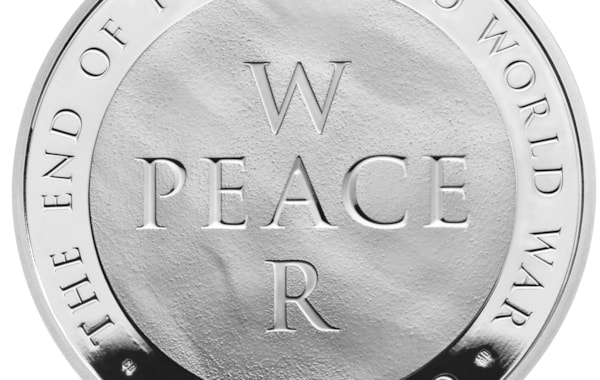 The Royal Mint, in collaboration with the Imperial War Museum, is marking the End of the Second World War with a new commemorative £5 coin.

This year marks the 75th anniversary since the End of the Second World War, marking the end of a war that had raged for six years, claiming millions of lives and brought suffering to entire populations.

According to The Royal Mint, the new coin acknowledges the pivotal events which took place throughout 1945 and the contribution of Allied soldiers; including continued fighting in the far east, the impact of the atomic bomb, and Victory in Japan.

The coin’s designers Matt Dent and Christian Davies capture the magnitude of events with a design inspired by stone inscriptions on war memorials. The typographic intersection of the words ‘war’ and ‘peace’ captures the sense of the conflict abating and the dawn of a new era.

Keep up to date with the latest coins with the allaboutcoins newsletter - sign up for free today!

The coin is available in limited-edition Gold Proof, Silver Proof and Silver Proof Piedfort, as well as a Brilliant Uncirculated edition.

Matt Dent and Christian Davies, designers of the 75th Anniversary of the End of the Second World War commemorative coin said:

“By taking our inspiration directly from the familiar hand-cut commemorations that are part of our collective memory, the effect is a common link transcending age and culture. Working closely with the Product Design team at The Royal Mint, we researched the method of chiselled lettering to create the digital clay model, whilst photographs of stone lend the real-life textures that give the natural ripples. Finally, we felt it was important to treat the characters in such a way that the word ‘peace’ dominates, conveying a sense that the horror of war has passed and a new era of peace has arrived.”

Visit www.royalmint.com to discover more about the commemorative £5 coin.