First 50p for South Georgia and the South Sandwich Islands 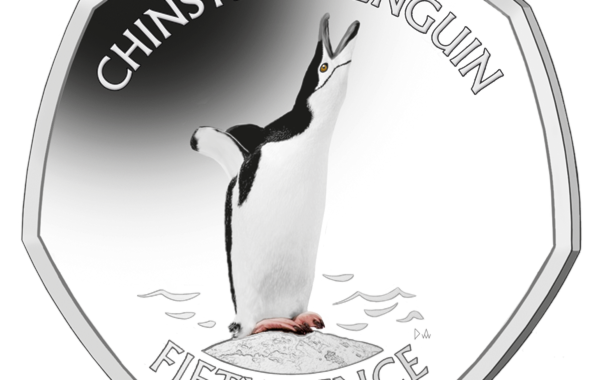 Pobjoy Mint has revealed the first 50p coin series on behalf of South Georgia and the South Sandwich Islands Government, with the first design featuring a Chinstrap Penguin.

After popular demand, Pobjoy Mint are delighted to announce the first 50p coin series on behalf of South Georgia and the South Sandwich Islands Government. The first coin in the new series features the Chinstrap Penguin.

The Penguins coins have been vastly popular with collectors and this very low issue limit series is sure to be no different. The series will be complimented with a limited edition silver coin series making this series even more special.

Situated about halfway between the southeast coast of Argentina and the Antarctic continent, South Georgia is often referred to as an Antarctic oasis, or 'the Galapagos of the poles' because of the huge numbers of Penguins that breed there. The Penguin is often regarded as the emblem of Antarctica, as Penguins are the most common birds in the Antarctic.

They live in such vast quantities that a population of some colonies can be larger than some cities with the total with the total number of breeding pairs in the Antarctic region estimated to be 20 million.

The Chinstrap Penguins are often referred to as 'Stonebreaker Penguins' due to their screech being so piercing that it could break stones.

The design on the coin itself features a male Chinstrap penguin screeching.