The current political climate has often been described as chaotic. But as Mike Roberts reveals in the first of a new series on collecting tokens, Brexit is relatively simple compared to the discord and disagreement found in 18th-century Britain.

Halfpenny sized tokens issued at the end of the 18th century were used as local and national currency and for advertising purposes. Pieces resembling tokens were also issued to satisfy the demands of collectors at the time.

In a series of five volumes published between 1963 and 1978 the pioneering author RC Bell turned what had hitherto been merely lists of tokens into tangible records of local, social and economic history. His sixth work, which finally emerged in 1987, entitled Political and Commemorative Pieces Simulating Tradesmen’s Tokens 1770 – 1802, published in a limited edition of 200 by Siegfried ‘Fred’ Schwer, is in many ways the most interesting of the whole set.

From a political point of view the United Kingdom has, over the last few years, been an interesting place in which to live.

…a gallery of Mrs Merkel, Messrs Macron, Barnier, Johnson, Farage and Rees-Mogg portrayed as heroes or villains depending on the issuer’s point of view, and a £350 million medalet featuring a bus and a reverse legend ‘Save the NHS’. A series of 50p coins with the legend ‘Enemies of the People’ would depict previously unknown High Court judges.

Well, the last century of the 18th century was rather like that.

Britain had only recently lost its American colonies, the price of bread vacillated like a roller coaster, the King’s health was such that a Regent was on permanent standby, there was a Revolution taking place just across the English Channel, and throughout the country activists were demanding a wider franchise, Parliamentary reform, freedom of speech and goodness knows what else.

And all of this was being depicted on tokens. 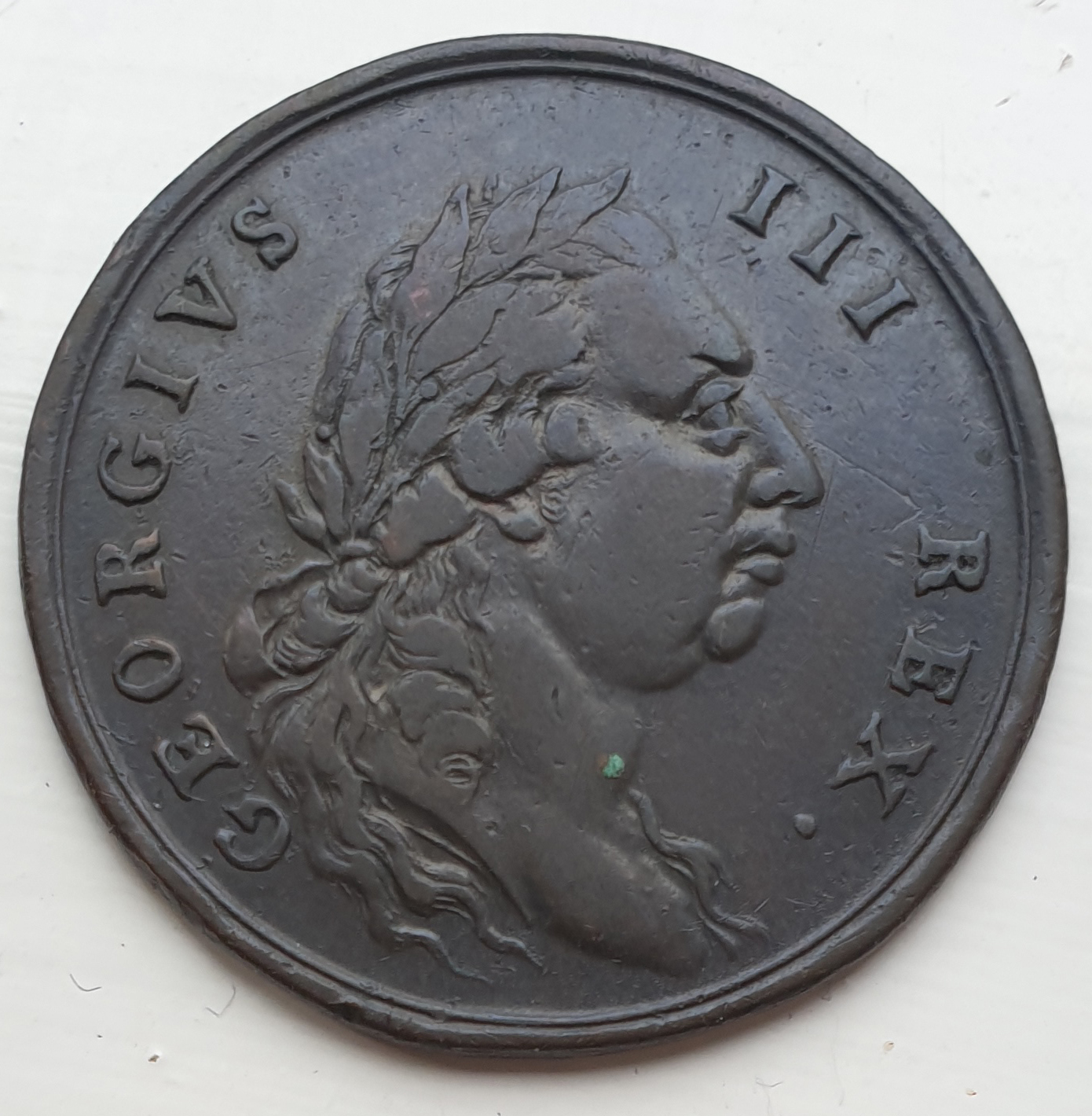 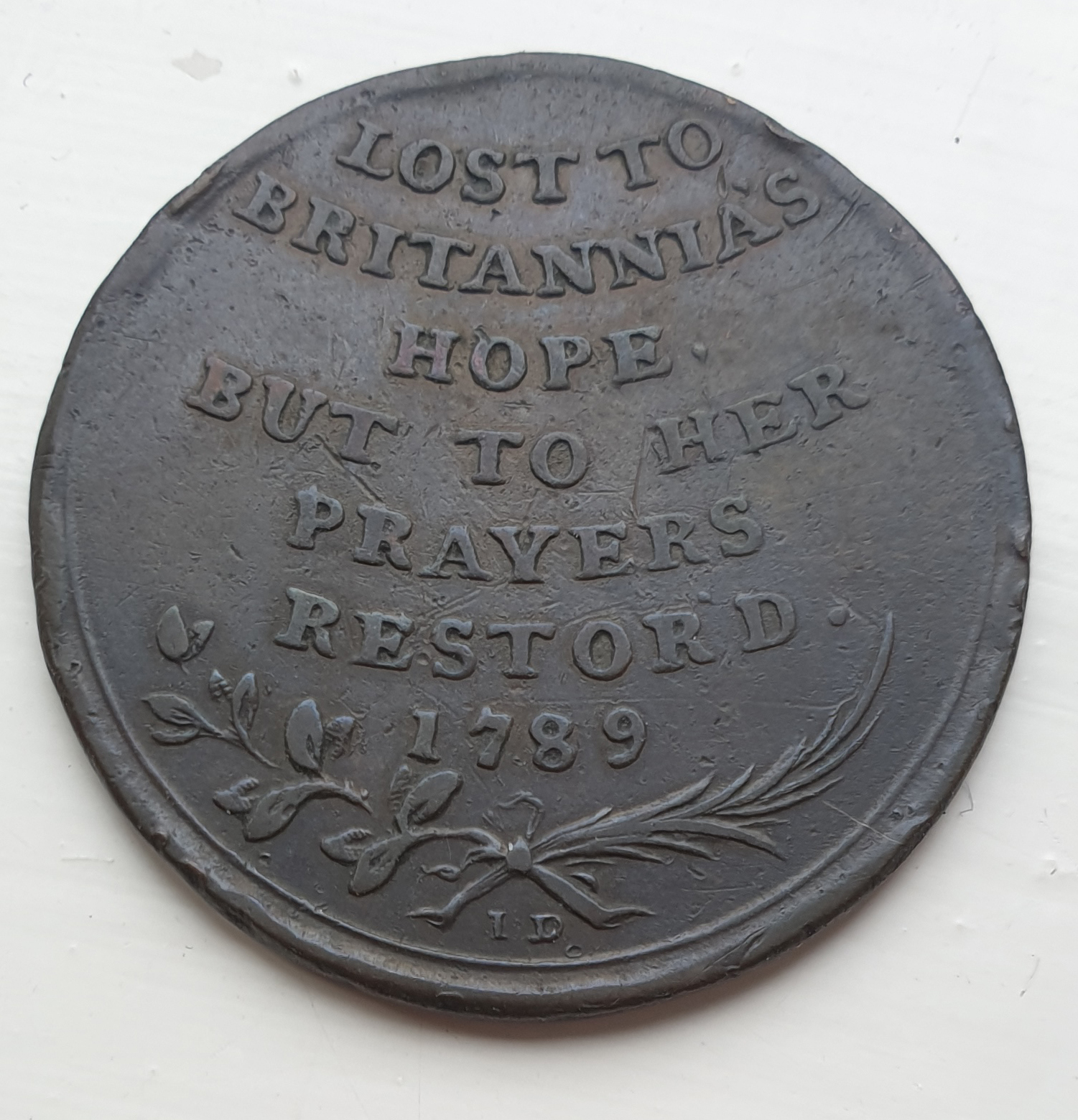 But with concerns about the character of the Prince of Wales and instability in France, the restoration of the King’s health was an event to be celebrated. The issue of a token depicting the King on the obverse and a reverse legend ‘LOST TO BRITANNIA’S HOPE BUT TO HER PRAYERS RESTORED 1789’ in large quantities probably coincided with an elaborate procession to St Paul’s Cathedral on 23 April.

Although not without his faults, George III was considered by many to be a far better bet than his likely successor.

Born in 1762, The Prince of Wales, George Augustus Frederick, was the King’s eldest son. Whilst clearly a bright, well-educated and cultured young man, he was profligate and unstable. At the time, and stating the position very simply, the Whig party tended to favour the Prince, whilst Pitt and the Tories were greatly relieved at the King’s recovery. 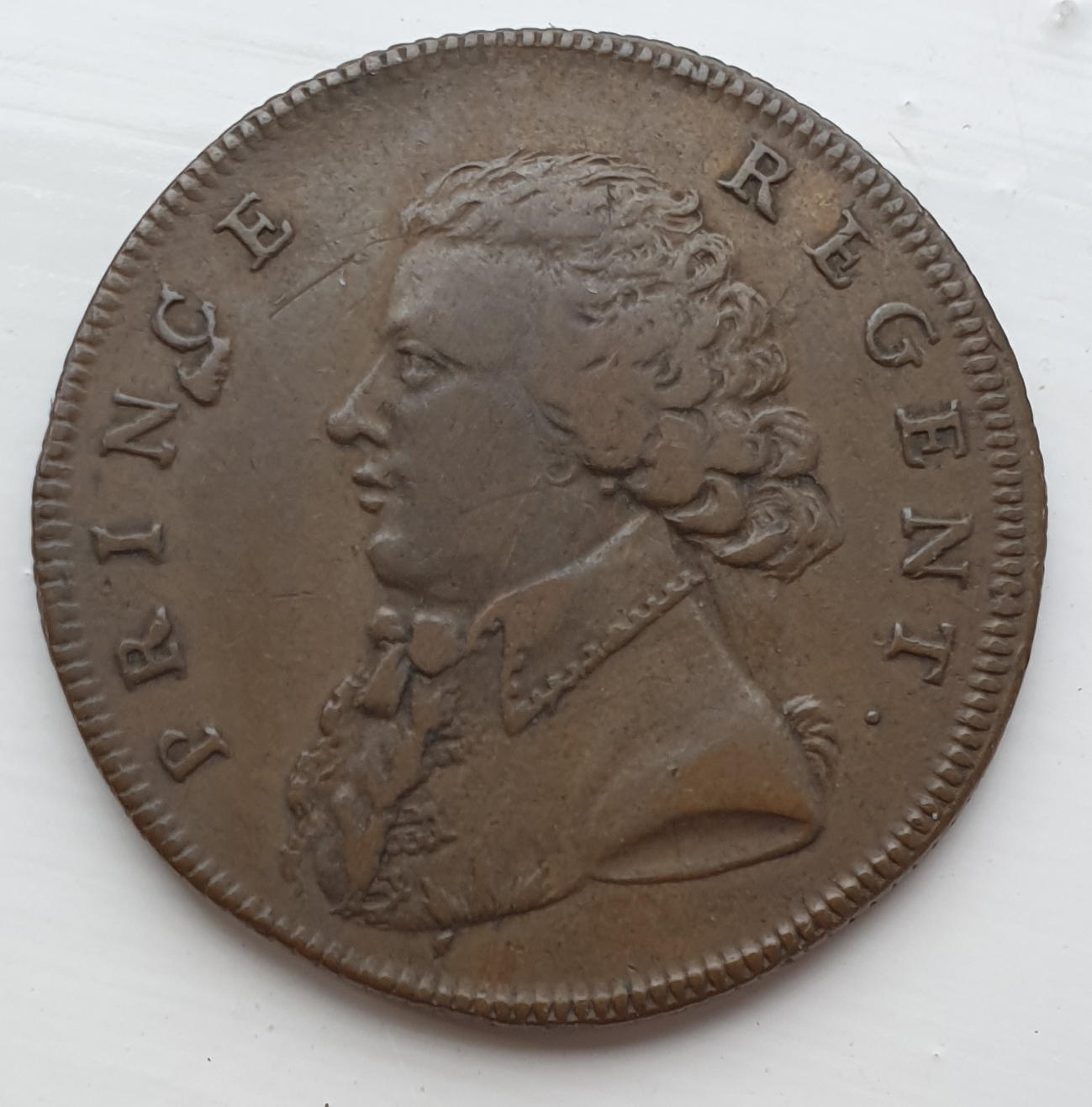 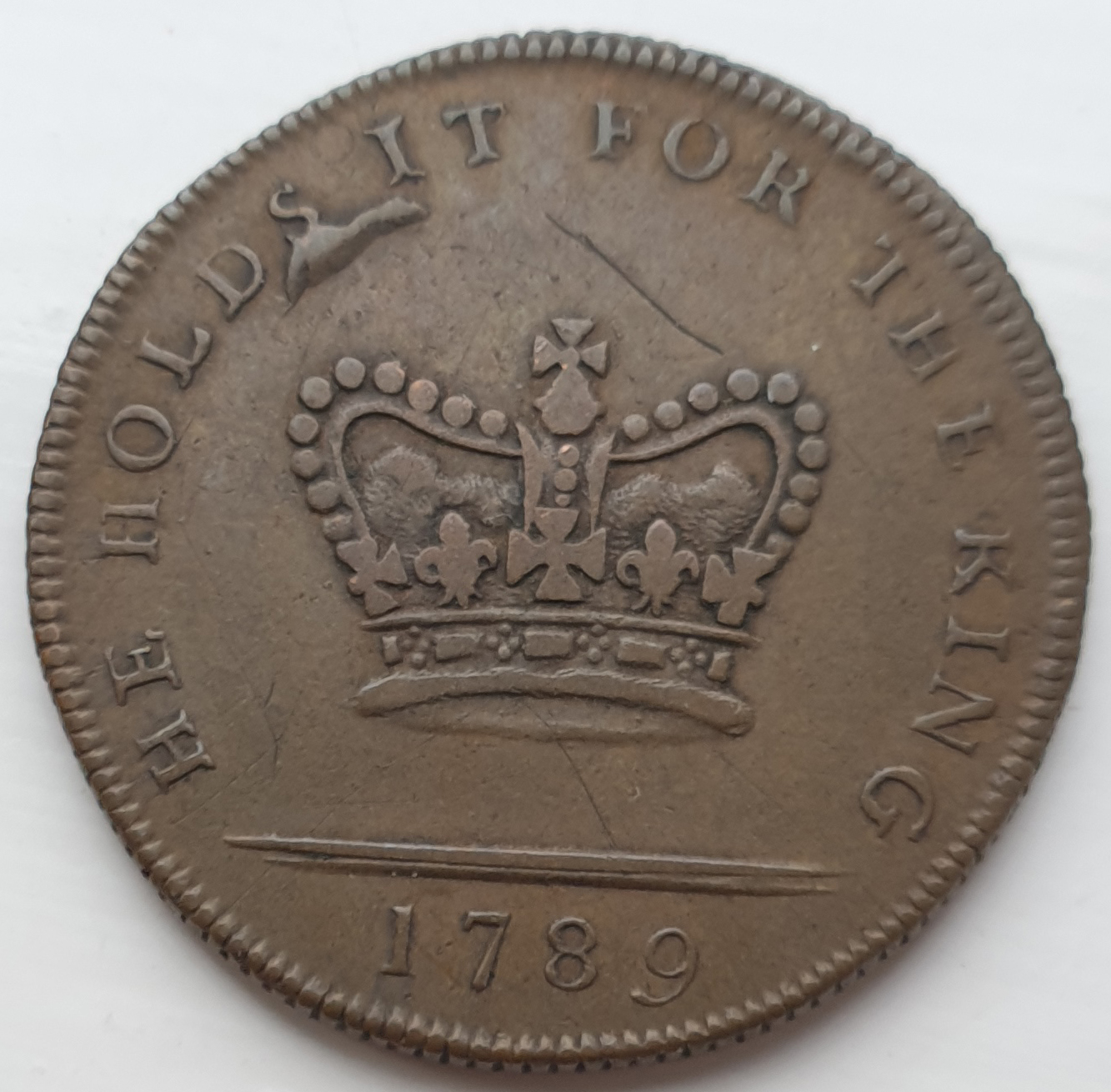 The Regent secretly married a Mrs Fizherbert. She was from a Roman Catholic family, and if the marriage had become public knowledge the Prince would have been barred from succeeding his father as monarch. A common token issued at the time depicts the Crown on the reverse with the legend ‘HE HOLDS IT FOR THE KING 1789’.

But it is the tokens making reference to the domestic politics of the United Kingdom and events in France which illustrate in detail the radical and in the latter case revolutionary times.

In the 71790s the demands for ‘universal suffrage’ (for men only and then only those who owned their own houses), the abolition of ‘Rotten Boroughs’ and other Parliamentary reforms, clearly caused alarm amongst the ruling classes.

Organisations were formed to defend the British Constitution and protect the status quo.

In May 1792 a proclamation was issued against seditious publications. There were trials, imprisonments and transportations. Habeas Corpus was suspended in 1794. Many of these events are referred to in the tokens.

The Prime Minister at the time was William Pitt the Younger. His radical opponent was Charles Fox. 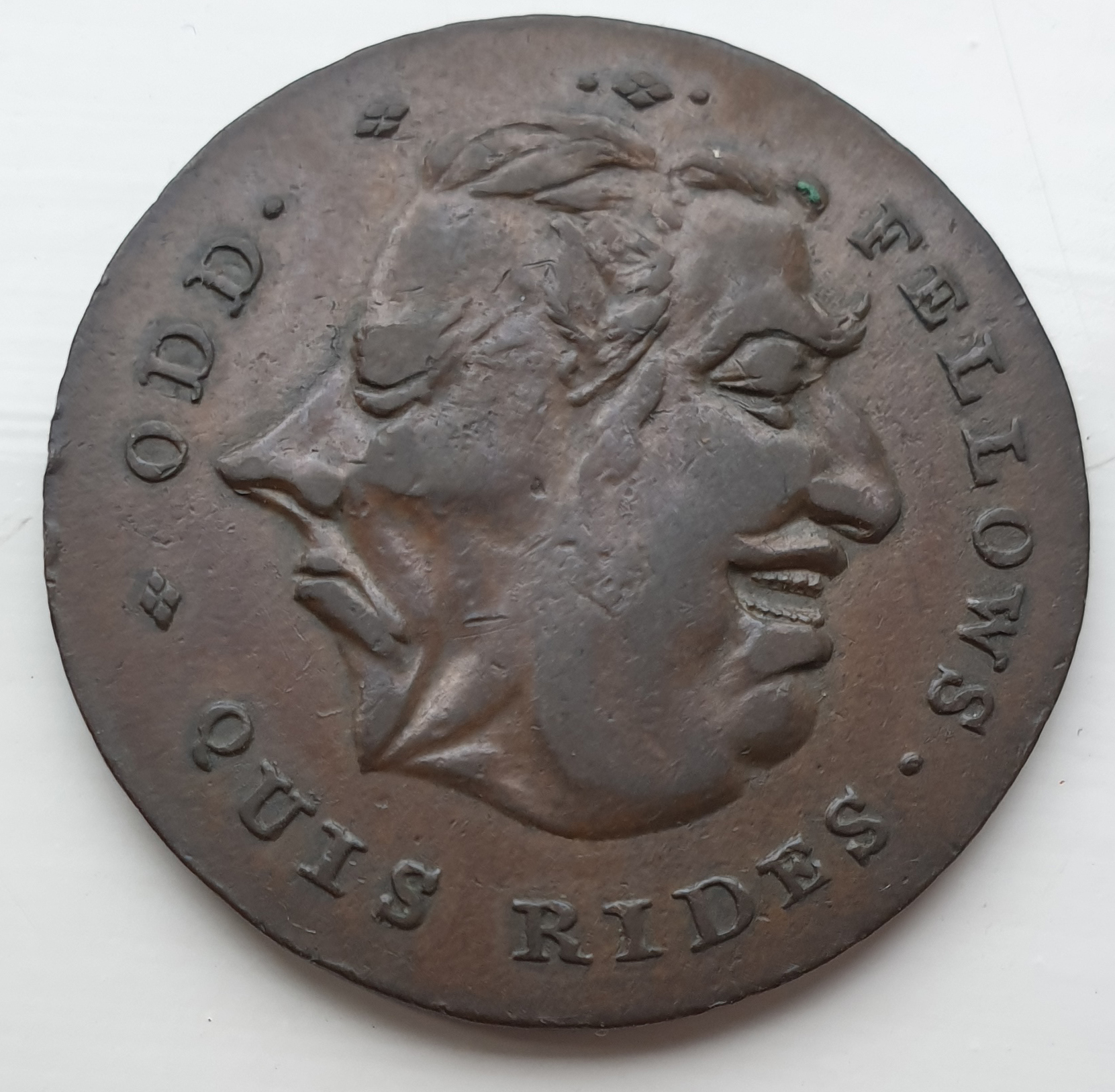 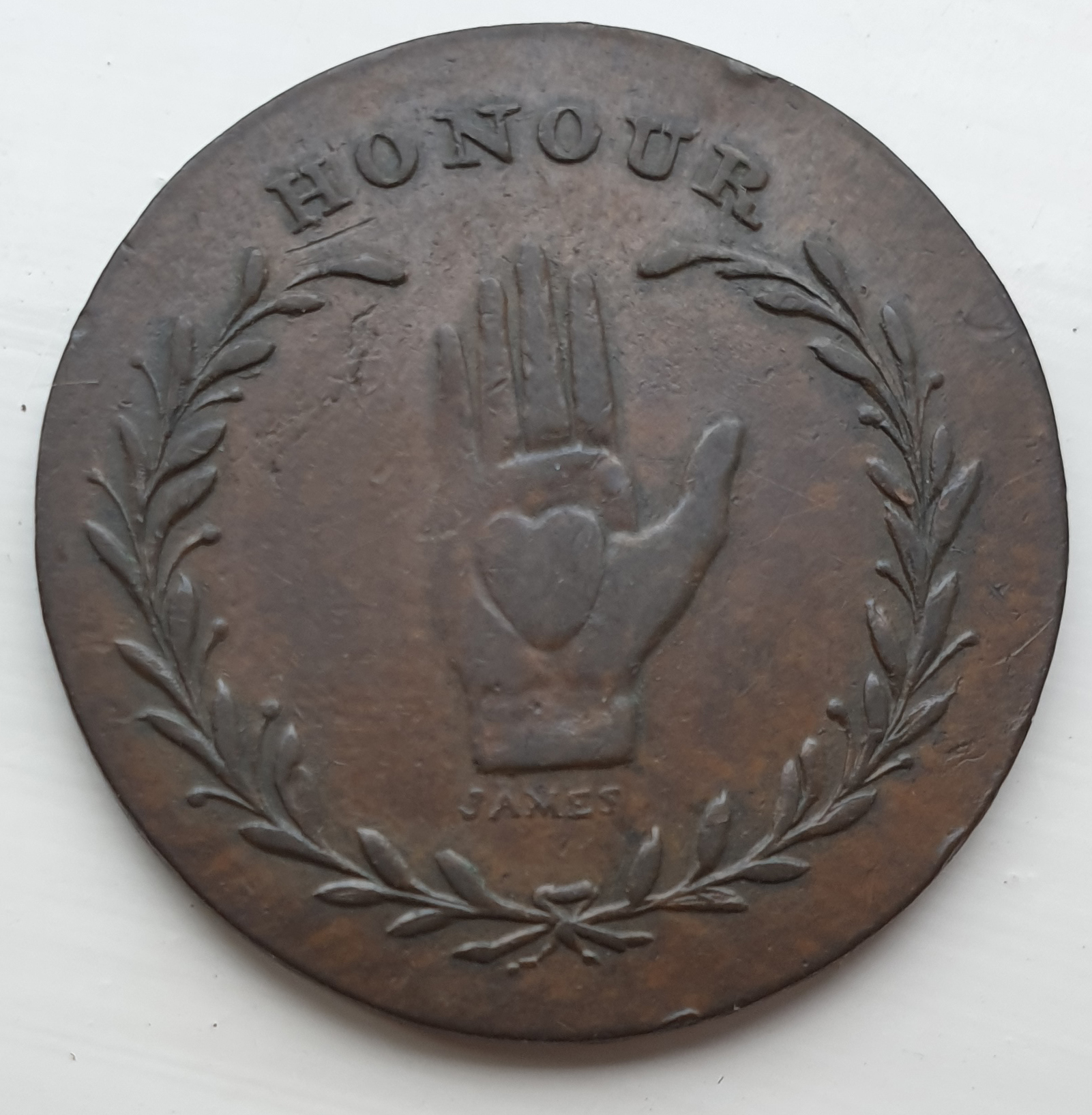 A token issued by Thomas Spence shows a Janus head with Pitt to the left and Fox to the right. The legend ‘QUIS RIDES’ translates as ‘who are you laughing’. On the reverse is a heart superimposed on the palm of the right hand with the single word ‘HONOUR’ as the legend. This stands for Fox who devoted his heart and his hand to the cause.