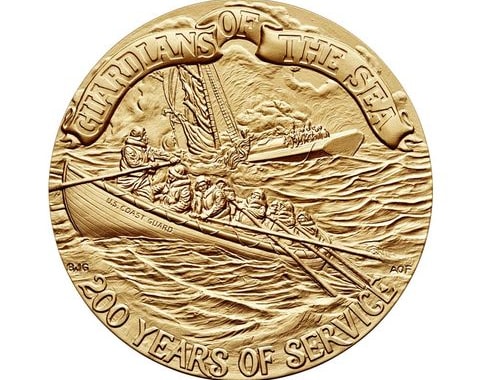 On 4 August 1790, President George Washington’s signature on the Tariff Act authorised the building of ten ships to stop smugglers and enforce tariff and trade laws. Together the ships were known as the Revenue Cutter Service. In 1915, the service merged with the U.S. Life-Saving Service and was officially renamed the Coast Guard. In its 229-year history, the United States Coast Guard has protected the US  at sea, as well as its ports and coastlines in times of war and peace.

The words “GUARDIANS OF THE SEA” are inscribed upon a flowing banner across the top, and the words “200 YEARS OF SERVICE” are on the bottom.

On the reverse is the official Coast Guard seal – the shield of the Coat of Arms of the United States, the motto “SEMPER PARATUS,” or “always ready,” and “UNITED STATES COAST GUARD 1790” superimposed upon two crossed anchors.

QUICK LINK: How tell if a coin is fake