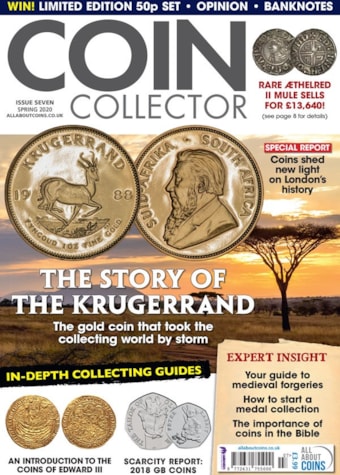 In an exclusive article for Coin Collector, numismatist Rory Naismith examines two fascinating coins from Anglo-Saxon London; a silver penny of the 820s, which sheds important light on the interactions between Mercia and Wessex at that time; and a penny of the 1030s featuring the first known example of a street-name in a coin inscription.

Royal Mint Director, Dr Kevin Clancy concludes his two-part guide to the iconic 1818 Crown; Dr Adrian Marsden begins a new series on identifying medieval forgeries, and Richard Kelleher examines another rarity from the Fitzwilliam Museum. Plus, we bring you more news on the latest discoveries and exhibitions, and another interview with a top numismatist, in the British Numismatist pages.

We also provide an introduction to collecting medals, featuring a history of medals, an insight into both their sentimental and financial value, and top tips on how to start a collection; and take a look at the money mentioned in the bible and its significance.

For collectors of modern coins, the issue will feature the latest Scarcity Index for 10p, 50p and £2 coins, as well as another insight into circulation coins from Change Checker.

Our regular banknotes guides detail the growing trend for regional currencies across Europe, and we start our globe-trotting guide to collecting banknotes by country, with the spotlight on Australian paper money.

Our focus on world coins includes an all-you-need-to-know guide to the South African Krugerrand, the story of the USA’s 1916 quarter dollar coin, and opinion columns covering the collecting scenes in Europe and the USA.

With the latest coin news, auction prices (in the auction house and online), another insight into British tokens, and the latest new coins in detail, issue 7 of Coin Collector is set to be another hugely popular issue.