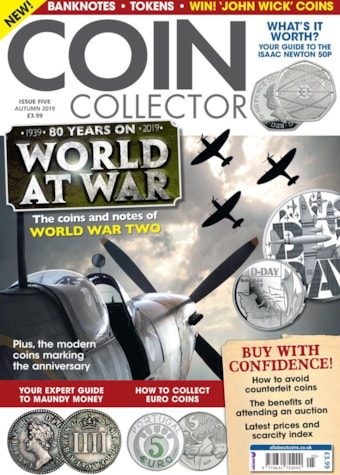 We mark the 80th anniversary of WW2 on how war affected coinage, your guide to the Isaac Newton 50p coins, plus details of the latest new coins issued around the world

The coins and notes of WW2

As we mark the 80th anniversary of the start of the Second World War, Dr Kevin Clancy, Curator of the Royal Mint Museum, details how the war affected the coinage of Europe. We also look at the many different banknotes issued during the war, including those used in occupied countries; and we take a look at the many modern coins issued in recent months to remember events such as D-Day, providing collectors with all the information they need to start a WW2 collection.

How to protect yourself against counterfeits

In a special collecting guide, author of the ‘Fake Coin Bible’ Sebastian Wieschowski provides a guide to avoiding counterfeit coins, detailing specific examples and how to identify and avoid fake examples.

In our popular banknotes section, expert Jonathan Callaway continues his beginners guide, detailing how to start collecting notes of the British isles and focussing on Scotland, the Channel Islands and the Isle of Man.

How to collect modern coins

As we head abroad for our summer breaks, we take a look at the many different coins you can find on trips abroad, including some rare Euro coins and British Isles coins. Meanwhile, we bring you details of the latest new coins issued around the world.

And much more coin collecting advice, information and inspiration…

The next part of our hugely popular guide to Roman forgeries

US Coins – the lowdown on the Franklin half dollar

Opinion – the views from the US and Europe, plus expert interviews