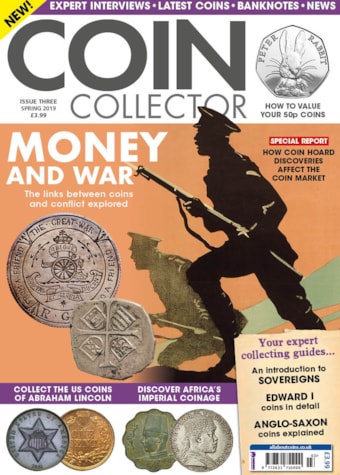 How coins have been affected by war, a guide to the colonial coins of the Africa, an introduction to the coins of Roman London, plus new discoveries from the world of numismatics

The third issue of Coin Collector features another wide range of subjects and article to appeal to all levels of collector.

In addition to the latest news and auction results we have a range of in-depth articles, including:

Currency and conflict: in a special feature Dr Kevin Clancy, the Directory of the Royal Mint Museum provides an insight into how coins have been affected by war, highlighting many intriguing pieces produced during times of conflict.

A fascinating guide to the colonial coins of the Africa, which turns the clock back to the 19th and early 20th century, when European empire-builders seized more than fifty African kingdoms in order to exploit their mining and agricultural potential. The comprehensive country-by-country guide provides an insight into both the currency of the mother country and the new currencies that were often created and are now highly collectable.

Dominic Chorney provides an introduction to the coins of Roman London, while Adrian Marsden continues his insightful guide to irregular Roman coins, focussing on 'barbarous radiates', copies of the antoninianus coinage which were produced in huge numbers during the 270s and 280s.

Of course, every issue of Coin Collector also features The British Numismatist, the special section dedicated to the latest research, discoveries and exhibitions from the world of numismatics, written by curators and experts.