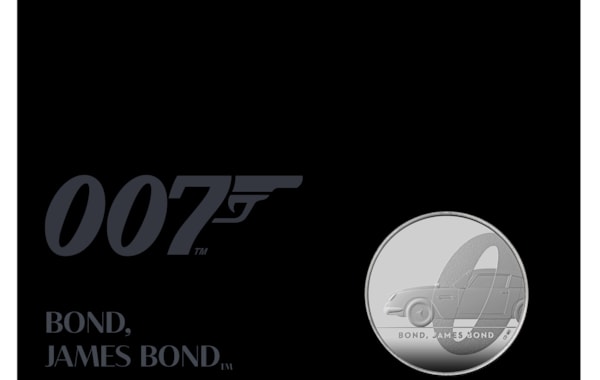 The Royal Mint has announced the launch of its James Bond commemorative coin and gold bar collection, which features a 7 kilo gold coin, the largest coin with the highest face value to be produced in the Mint’s 1,100-year history.

The Royal Mint's James Bond coin collection was issued in anticipation of the new film No Time To Die, and although the release of the new 007 chapter has now been delayed, the coins are already proving popular with fans of the British film franchise.

The Bond collection features three coin designs which when placed together reveal the famous 007 motif.

The first coin from the series has the profile of the classic Bond Car, the Aston Martin DB5. The two remaining coins feature the famous submarine car that appeared in The Spy Who Loved Me and James Bond’s iconic jacket and bow tie.

'As Bond fans ourselves, we’ve enjoyed re-watching some of our favourite films. The design series focuses on iconic imagery from the Bond films. Finding the balance between design detail and what can be accomplished in production was a challenge, nowhere more so than the intricate spokes of the DB5’s wheel.'

Clare Maclennan, Divisional Director of Commemorative Coin at The Royal Mint said, “We are thrilled to be unveiling our James Bond commemorative coin collection launching in line with No Time To Die.

The three coins are available in several editions, from a Brilliant Uncirculated version to precious metal coins in silver and gold proof. Furthermore, the Inspired Innovation editions include micro-text of the twenty-five film titles which require a magnifying glass to read.'

The Royal Mint Experience, based in South Wales, is launching a new exhibition called ‘Currency Undercover’ which tells the story of how gold, sovereigns and currency from around the globe have been used in undercover operations throughout history. The exhibition also features rarely seen objects including a briefcase to transport Sovereigns in the 1963 James Bond film ‘From Russia With Love’.