The 19th-century corporation stalls inside Bath Abbey were recently removed in advance of vital repair and stabilisation work to the Abbey’s collapsing floor. The work is part of the £19.3 million Heritage Lottery supported Footprint Project which will also create new spaces and facilities and install an eco-friendly heating system.

Below the platform which housed the stalls a few interesting artefacts have been discovered: small denomination coins for the most part as well as an intact order of service for Tuesday 15 May 1902.

However, what no one had expected to find were two coins, found within days of each other, depicting a devil and bearing the legend ‘CIVITAS DIABOLI’ on one side and, on the reverse, ‘13 MAJ ANHOLT 1973’. Naturally, these coins piqued the interest of the team and further research has revealed the strange story of a Danish eccentric who perpetrated an elaborate 40-year long hoax which was only unmasked almost a decade after his death.

The date on the coins refers to an incident which took place on the island of Anholt, which lies between Denmark and Sweden, in May 1973. Thirteen ‘ritual sites’ were discovered by local residents which precipitated an investigation by police from the Danish mainland. The sites were identified by the presence of strange masks, weird stone formations, bones wrapped in string, black candles and even a (fake) shrunken head on a stake.

The story was picked up by the Danish national media and salacious stories of black masses and satanic cults on Anholt abounded.  However, one newspaper’s claim of possible human sacrifice was soon debunked when the alleged victim contacted the police to say she was very much alive and living on the mainland. After a few months the media hysteria petered out, but the Anholt mystery was far from over.

Coins like those found at Bath Abbey began to be discovered ‘hidden’ in churches and museums across Denmark. Some were accompanied by letters claiming to be from a satanic high priestess named Alice Mandragora (a name which appears on some coin designs alongside the wonderfully named Karl Klunck and Dunk Wokgnal).

Other letters from Mandragora or short stories about the ‘Anholt cult’ have been found hidden in Køge city museum and even behind paintings at the police headquarters in Copenhagen. All these artefacts reference the date 13 May 1973 and Anholt. To date nearly 400 coins are known to have been found.

In 2013 the Danish newspaper Politiken ran a six-part investigation into the coin phenomenon, revealing that the Anholt mystery was a hoax perpetrated by Knud Langkow, an office clerk at the National Gallery of Denmark who had died in 2004 aged 73.

His niece, Lene Langkow Saaek, told the newspaper that he was not a Satanist and that the hoax was just his sense of humour. ‘I think normality annoyed him’, she said. ‘He did not like ordinary.’ It seems that his sense of humour struck a chord with a select group within the Danish numismatist community who were in on the joke.

Independently of Langkow, respected Danish coin expert Jørgen Sømod, along with the original coin engraver Bent Jensen, are both alleged to have designed, minted and hidden hundreds of their own ‘Anholt Coins’.

It also appears that Langkow was an inveterate hoaxer. In 2016 Danish television station TV East broadcast the story of a letter and an old photograph found in Vordingborg Church fifteen years earlier. The letter, which was dated 1918 and contained a woman’s message to her future children, was found behind a radiator by the priest’s daughter and the news story was about how she had kept the letter and photograph down the years and wanted to find out who the woman was.

Lene Langkow Saaek duly got in touch with the TV station. ‘I was in no doubt that it was one of my uncle’s fabrications when I saw the letter’, she said.  ‘My uncle’s writing is very recognisable and he had made many similar things for his Satan cult in the 1970s.’ She thought that he had probably found the photograph at a flea market and then written the letter as one of his ‘fun facts’. Asked again why her uncle planted hoax letters and coins she replied, ‘He did it to make fun of the bourgeoisie and to get people out of their chairs and to wonder.’

The Anholt coins are currently being conserved by Wessex Archaeology and will be included in the final site archive alongside artefacts dating from the Roman through to the modern period.

Bruce Eaton asks: are readers aware of any other of these coins being found in the UK?

According to Carsten Viggo Nielsen, a Danish academic who has access to Langkow’s papers (presently stored at Køge Museum), the coins discovered in Bath are unlikely to be an isolated incident. In Denmark the coins were often hidden in association with letters, commented pictures, short stories etc. – which built up an invented mythology around the character of Alice Mandragora. This is not known outside of Denmark and we would be equally fascinated to learn if anything of this sort had also been found in the UK. If you have any information please email: [email protected] and we will pass on your findings 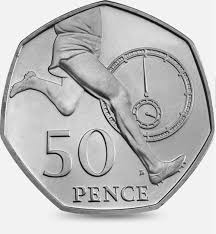