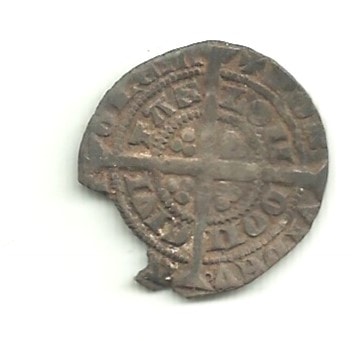 A university lecturer has found a rare, 600-year-old silver groat from the time of Edward III, whilst out gardening, in a rare example of a lockdown coin discovery.

Studying coins and gardening are two of the ways people have spent their new-found spare time during the current lockdown, and one lucky gardener has inadvertently combined both pastimes, as he discovered a rare Edward II coin whilst weeding his raspberries.

According to a recent BBC report, university lecturer Dr Jamie Pringle found the coin whilst gardening at his home in Stoke-on-Trent.

The coin discovered in the soil was a silver groat from the time of Edward III, around 1352-1353.

Victoria Allnatt, Staffordshire and West Midlands finds liaison officer, confirmed the coin was issued during Edward III's reign and was minted in London. Whilst the coin is relatively common across the UK, only around twenty examples are said to have been found in Staffordshire.

Dr Pringle's tweet, announcing the find, is shown below…

— Jamie (@milgeol) April 7, 2020 Sign up to the allaboutcoins newsletter
It's free and friendly, and it's packed with info, inspiration, and advice to help you keep on collecting, and build your coin collection. Just click here to sign up to the newsletter.