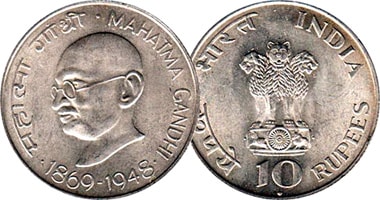 The UK Treasury has confirmed that a possible coin to celebrate the life of Mahatma Gandhi is being considered following a letter from Chancellor of the Exchequer Rishi Sunak.

The UK Treasury recently stated: 'RMAC is currently considering a coin to commemorate Gandhi', apparently prompted by a letter written to the Royal Mint Advisory Committee by Chancellor of the Exchequer Rishi Sunak. The letter from the Conservative MP said: 'Black, Asian and other ethnic minority communities have made a profound contribution to the shared history of the United Kingdom. ...  I know you are already seeking to fully consider diversity in future coin design and I very much welcome your efforts.'

The idea of a coin to honour Gandhi, who is known as the 'Father of the Nation' in India, has actually been considered for months, with former Chancellor Sajid Javid previously mentioning a request to issue a coin for the civil rights leader in October 2019.

The choice of Gandhi as a representative of the BAME community has also been questioned. Writing in The Independent newspaper, Zehra Zaidi, the lawyer and former Conservative MP who founded the We Too Built Britain Campaign, said that:

'Sunak had tweeted in support of Black Lives Matter and the need for inclusion and representation. Gandhi was not someone black campaigners would have nominated, with many voicing support for Seacole.'

Other subjects suggested for future British coins include:

The idea, suggested by some reports, that Gandhi would be the first person of colour on Britain's coinage is incorrect.

Walter Tull – the first black officer in Britain’s Armed Forces and, incidentally, one of the first mixed race footballers having played for clubs including Tottenham Hotspur – appeared on a commemorative Silver Proof £5 coin in 2014, within a series of coins commemorating the First World War. However, the £5 coin was a not put into general circulation.

Whilst suggesting others may be more suitable for a coin or banknote honour, Zehra Zaidi remains positive about the move, concluding her article in The Independent with:

'The message to all is that ethnic minority Britons matter… What is so inspiring, is that Sunak feels the same way. Our campaign cannot wait to work with HM Treasury and the Royal Mint to ensure that the process ahead is as inclusive as possible.'

Mahatma Gandhi has appeared on Indian coins, including 1 and 10 Rupees values issued in 1969.