The Chancellor of the Exchequer Philip Hammond has revealed that Britain will issue a special 50p coin to mark Brexit, with the coin featuring the message: 'Peace, prosperity and friendship with all nations.'

The news was revealed during the Chancelllor's budget speech on 29 October, and the full Budget Report – October 2018 reads:

'The Royal Mint has a long-established tradition of producing coins in order to commemorate historic moments, including the 2012 Olympics, the UK’s accession to the European Economic Community, and the centenary of the First World War. In line with this tradition, the Royal Mint will produce a coin to commemorate the UK leaving the European Union. This coin will be available in Spring 2019.'

'Peace, prosperity and friendship with all nations' along with 29 March 2019, the date Britain is expected to leave the European Union (EU).

As with many aspects of Britain's departure from the EU, news of the coin was met with a mixed response. Headlines included:

The coin has prompted many comments and jokes on social media, whilst spoof news website News Thump ran with the headline: 'Brexit 50p coin already worth only 20p' claiming economists predict the pound will weaken due to the historic decision.

In truth, until we know the number of Brexit 50p coins to be issued, it's uncertain if the coin will follow other 50p designs – such as the Kew Gardens 50p – and become much more valuable than its face value. Unlike less contentious 50p coins, such as those depicting Paddington Bear or Peter Rabbit, the Brexit coin is set to split opinion.

According to a Sky News report, the Royal Mint have been working on the coin for some months. 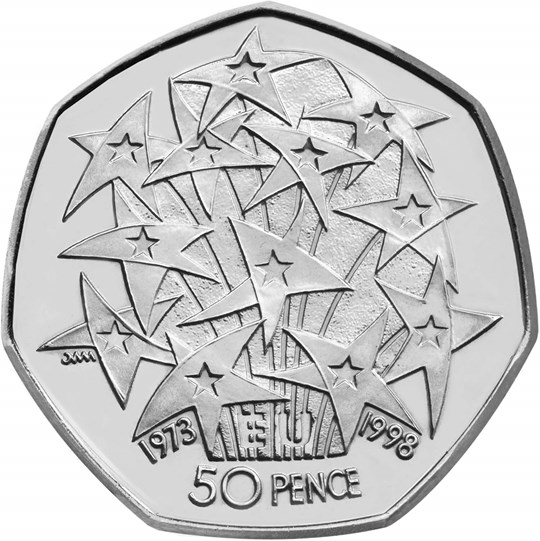 Another 50p was issued in 1992 and 1993 to mark the 'United Kingdom's Presidency of the Council of Ministers and the completion of the Single European Market'.