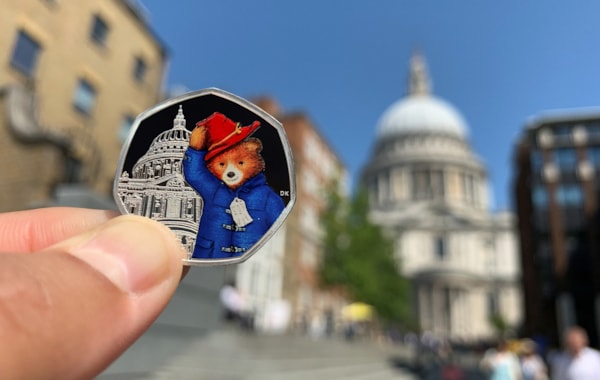 First created in 1958 by Michael Bond, Paddington Bear has captured the imagination of generations and the latest coins depict Paddington’s ventures to two of the capital’s most iconic landmarks –The Royal Mint’s former home, The Tower of London, and St Paul’s Cathedral.

The designs look set to continue the popularity of the 2018 coins which saw Paddington visit his namesake train station and the guards outside Buckingham Palace.

Nicola Howell, Director of Consumer Coin at The Royal Mint said: “Following the huge popularity of the coins featuring the much-loved bear last year, we thought it was only right that Paddington continued his adventures around London on UK coinage. Paddington Bear is a massive part of British popular culture and is a favourite amongst fans of all ages, who we’re sure will be looking out for him in their change, the first of which will go into tills in The Royal Mint Experience.”

How can I get a Paddington Bear 50p?

The new Paddington coins will enter circulation on 13 August 2019, starting at the tills of The Royal Mint Experience, and thereafter making their way into the pockets of the British public, so be sure to check your change.

Coin collectors can also buy the coins in a range of finishes from the Royal Mint's website, starting at £10 for a ‘mint condition’ Brilliant Uncirculated finish coin, whilst the limited edition Silver Proof coins capture the vivid blue and vibrant reds of Paddington’s famous duffle coat and hat in 'incredible detail'.