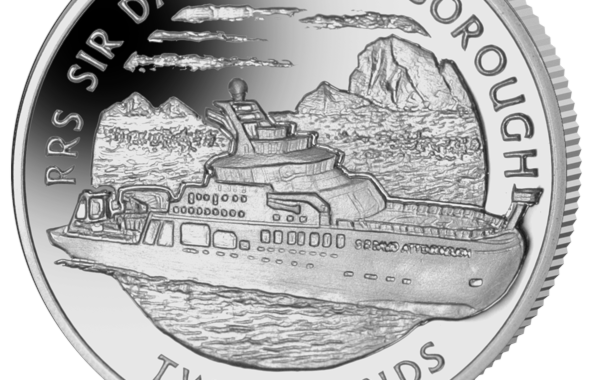 Pobjoy Mint have revealed the design of a silver crown, along with a Silver 'Boaty McBoatface' 50p, which was presented to Sir David Attenborough at the official Naming Ceremony on 26 September.

The Duke and Duchess of Cambridge officially named the UK's new polar research ship after Sir David Attenborough recently, and Pobjoy Mint issued a special Silver Crown to mark the occasion, alongside a new silver version of the 'Boaty McBoatface' 50p.

The crown coin is available in Cupro Nickel and Proof Sterling Silver, and features a design showing the research ship at sea in the Antarctic with the name RRS Sir David Attenborough shown on the outer edge of the coin. The Crown coin has a £2 denomination.

In 2014, the UK government announced funding for the construction of a new polar research vessel for the British Antarctic Survey to replace a pair of existing vessels RRS James Clark Ross and RRS Ernest Shackleton.

The new vessel is named after the famed British broadcaster and natural historian Sir David Attenborough. The ship will be tasked with the purpose of carrying out research in Polar Regions with its improved ice breaking capabilities and greater endurance previously seen by its ancestors. The vessel will also serve as logistic support for the British Antarctic Survey teams in shore locations.

Pobjoy Mint also released a silver version of the Boaty McBoatface 50p which was also presented to Sir David Attenborough at the naming ceremony.

Boaty McBoatface will be carried on the research vessel RRS Sir David Attenborough and will be undertaking scientific research. The findings will be sent back to scientists aboard the research vessel and on land. The AUV is able to travel on its own under water and ice reaching depths of 6,000m and with a range of up to 6,000km.

The design on the coin shows Boaty McBoatface being lowered down into the sea from research ship RRS Sir David Attenborough which has the name inscribed on the side of the vessel. The background shows an iceberg and the Antarctic landscape.

The coin is available in Cupro Nickel Diamond Finish with Boaty McBoatface being portrayed in colour.