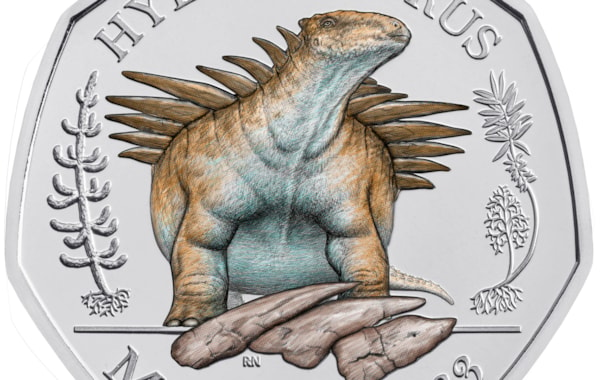 The Royal Mint have issued the final coin in their Dinosauria 50p coin collection, with the design featuring a Hylaeosaurus, one of the first dinosaurs to be discovered.

The Royal Mint, in conjunction with the Natural History Museum, has launched a commemorative Hylaeosaurus 50p coin - the final coin in the popular Dinosauria Collection series which celebrates Britain’s contribution to the discovery of dinosaurs.

The Dinosauria Collection is the first coin series to feature augmented reality technology, brings the mighty beasts to life from the comfort of home. Upon receiving their coin, collectors simply need to download The Royal Mint’s ‘Activate App’ and scan the packaging to unearth exclusive content including fascinating facts, animated clips and imagery.

"As one of the nation’s most loved tourist attractions remain closed, we are pleased to partner with the Natural History Museum to bring dinosaurs to life from the comfort of your home. It is the first time that The Royal Mint has combined augmented reality with a coin series as we continue to innovate and enrich the experience of coin collecting.  Simply by scanning the packaging our customers will be able to access exclusive content which celebrates Britain’s role in the discovery of dinosaurs, brings the animals to life through animation and explores the intricate details of each coin."

"The Museum is thrilled to see the release of the third and final coin in the Dinosauria Collection, an exciting series celebrating Britain’s contribution to the discovery of dinosaurs. The collection features each creature that led anatomist and founder of the Natural History Museum, Sir Richard Owen to his ground-breaking conclusion, including Megalosaurus, Iguanodon and finally Hylaeosaurus."

Renowned British paleo-artist and designer of the Dinosauria collection, Robert Nicholls, with the expert guidance of Prof. Paul M. Barrett from the Earth Sciences Department of the Natural History Museum, has brought all three dinosaurs back to life.

Based on current understanding and the expertise of leading palaeontologists at the Natural History Museum, the coin design is a scientifically accurate reconstruction of the dinosaur and the environment that it lived in.