In the second part of his guide to collecting political tokens, Mike Roberts takes a look at the designs commenting on parliamentary reforms, high-court trials, and fears of France's bloody revolution.

The London Corresponding Society was formed in 1793 with Thomas Hardy as its secretary. Its main purpose was to promote parliamentary reform.

Thomas Hardy was a shoemaker who was greatly involved in the administration and development of Corresponding Societies. Meetings were held in secret and letters written in code. Although by modern standards the parliamentary reforms being sought were relatively modest, the creation of a republic with the help of France as a second option was clearly not.

Hardy was arrested on 12 May 1794. Many others, including Horne Tooke, were rounded up in the next few days. Habeas Corpus was suspended on 22 May, permitting the indefinite detention of suspects.

John Horne Tooke was born in 1736. He was educated at Westminster, Eton and Cambridge and was very active in the ‘Society for Supporting the Bill of Rights’. He, Hardy, and others were defended by Thomas Erskine in a series of trials in the late autumn of 1794.

Bell gives full details of the differing approaches adopted by Erskine, one of the leading advocates of his day, in the various trials. They all resulted in Not Guilty verdicts and many tokens celebrating this were issued. 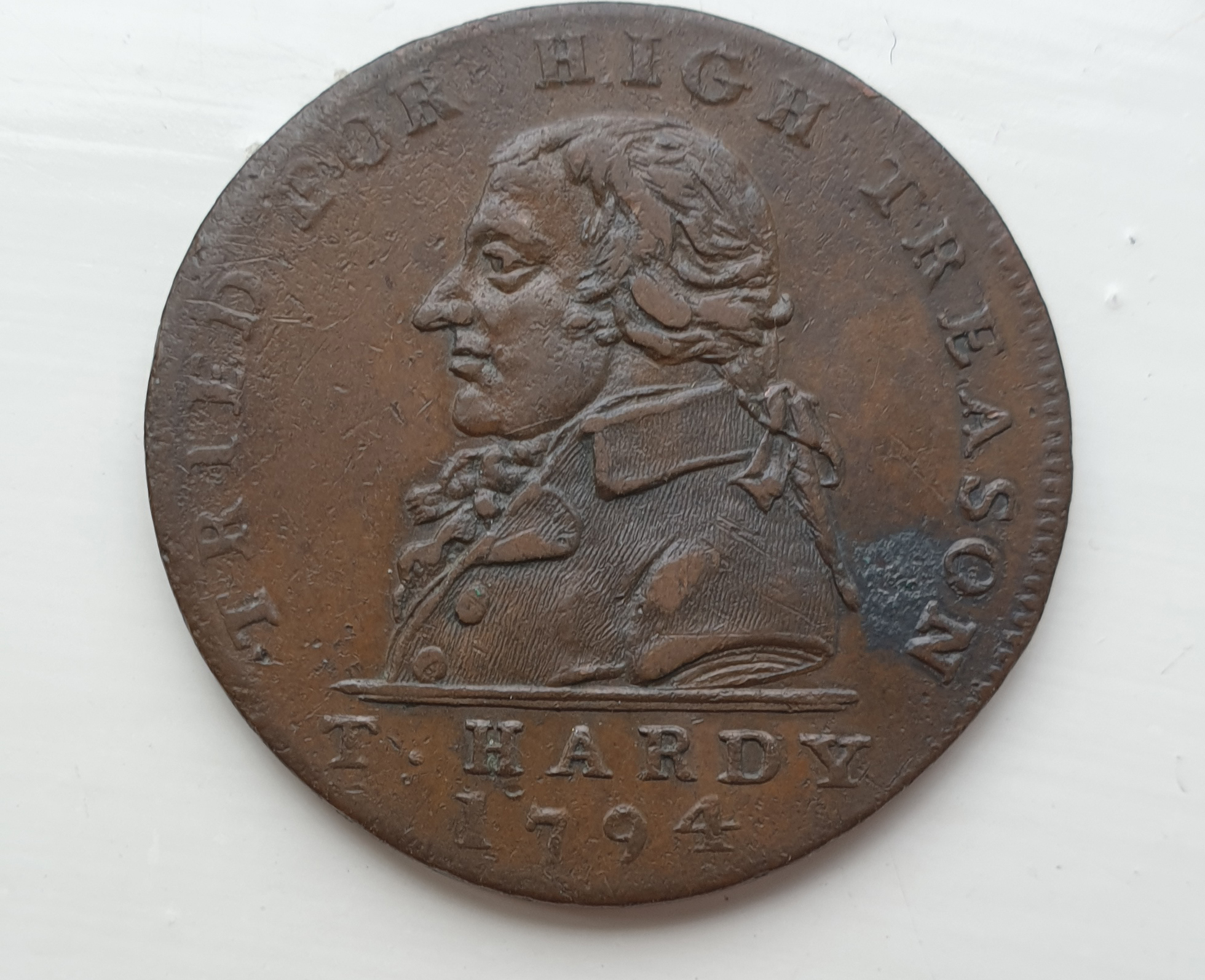 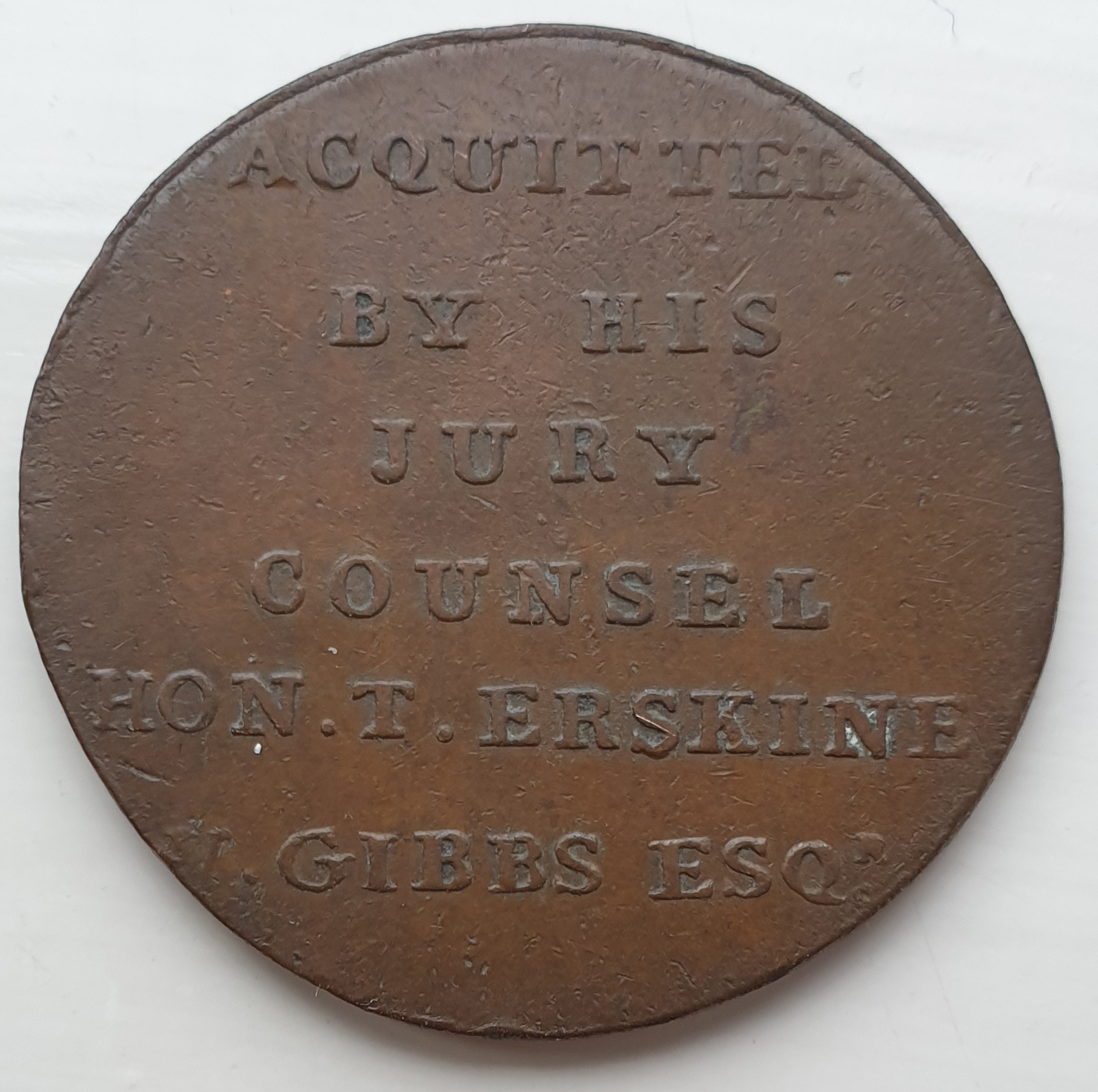 A very similar piece was issued in relation to Tooke as was a more elaborate piece with a right facing bust and a reverse legend ‘NOT GUILTY SAY THE JURY. EQUAL JUDGES OF LAW AND FACT’ and the names of counsel. 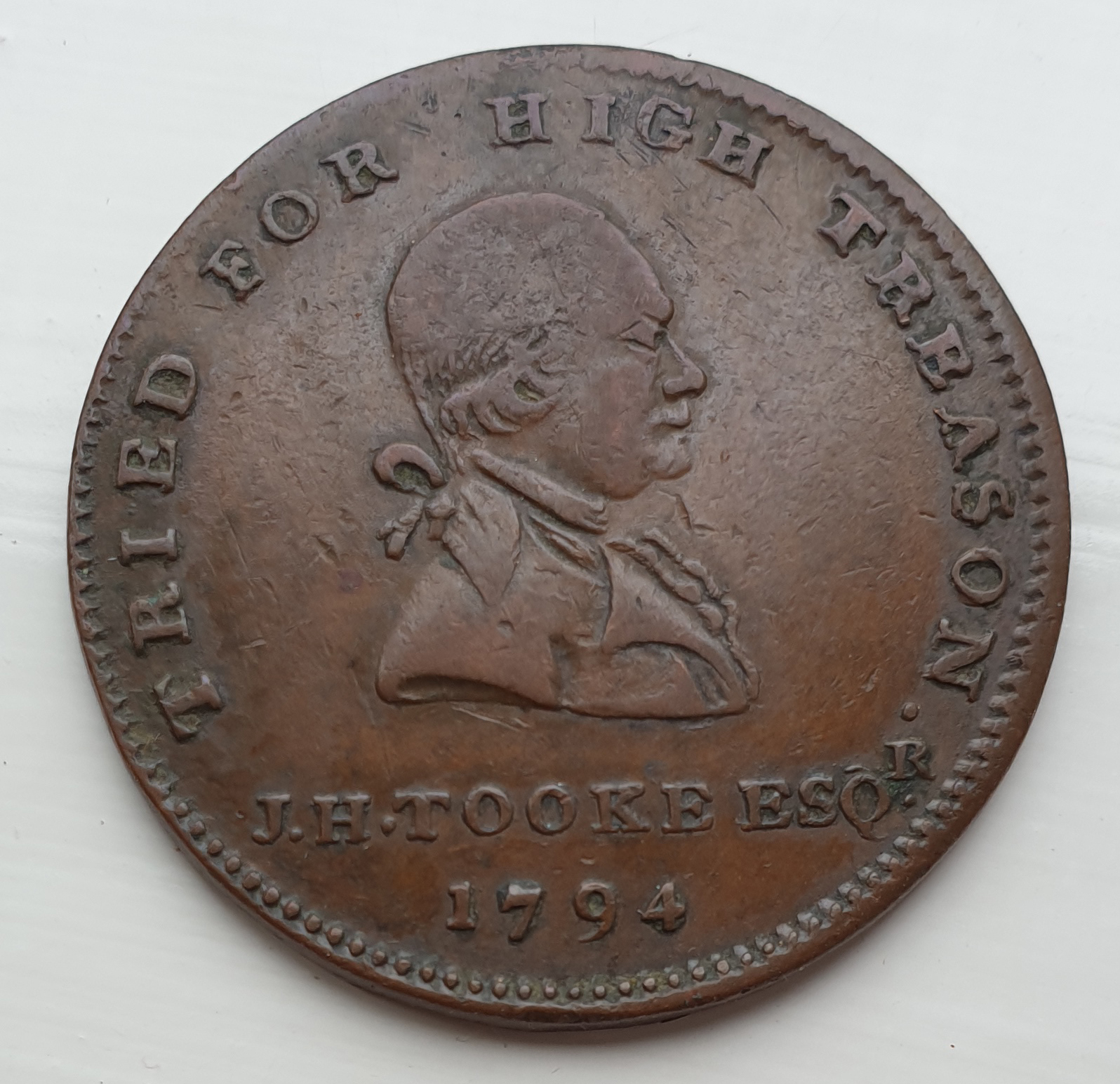 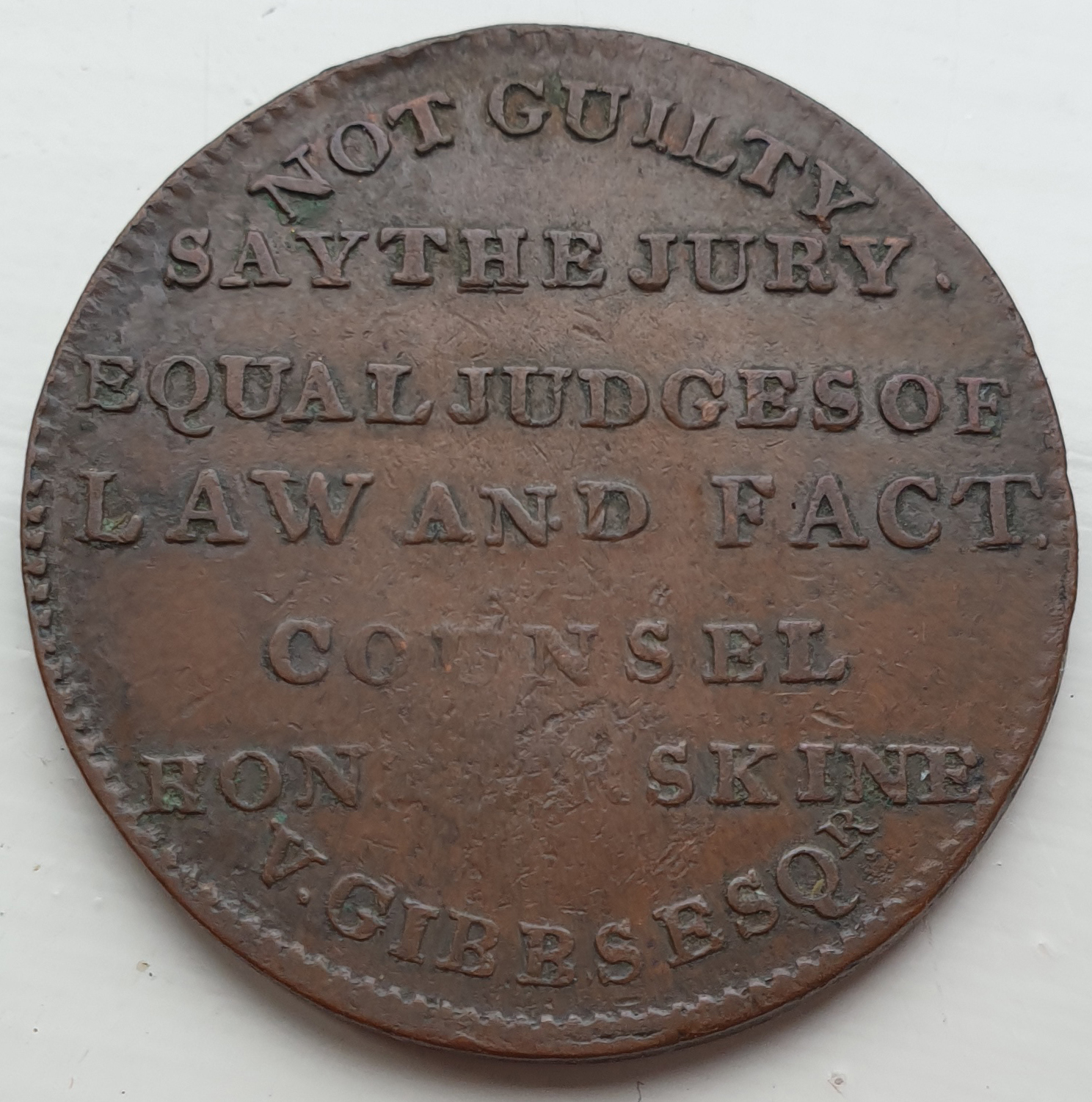 Erskine had his own token, labelling him ‘A FRIEND TO FREEDOM & RIGHTS OF MAN’ 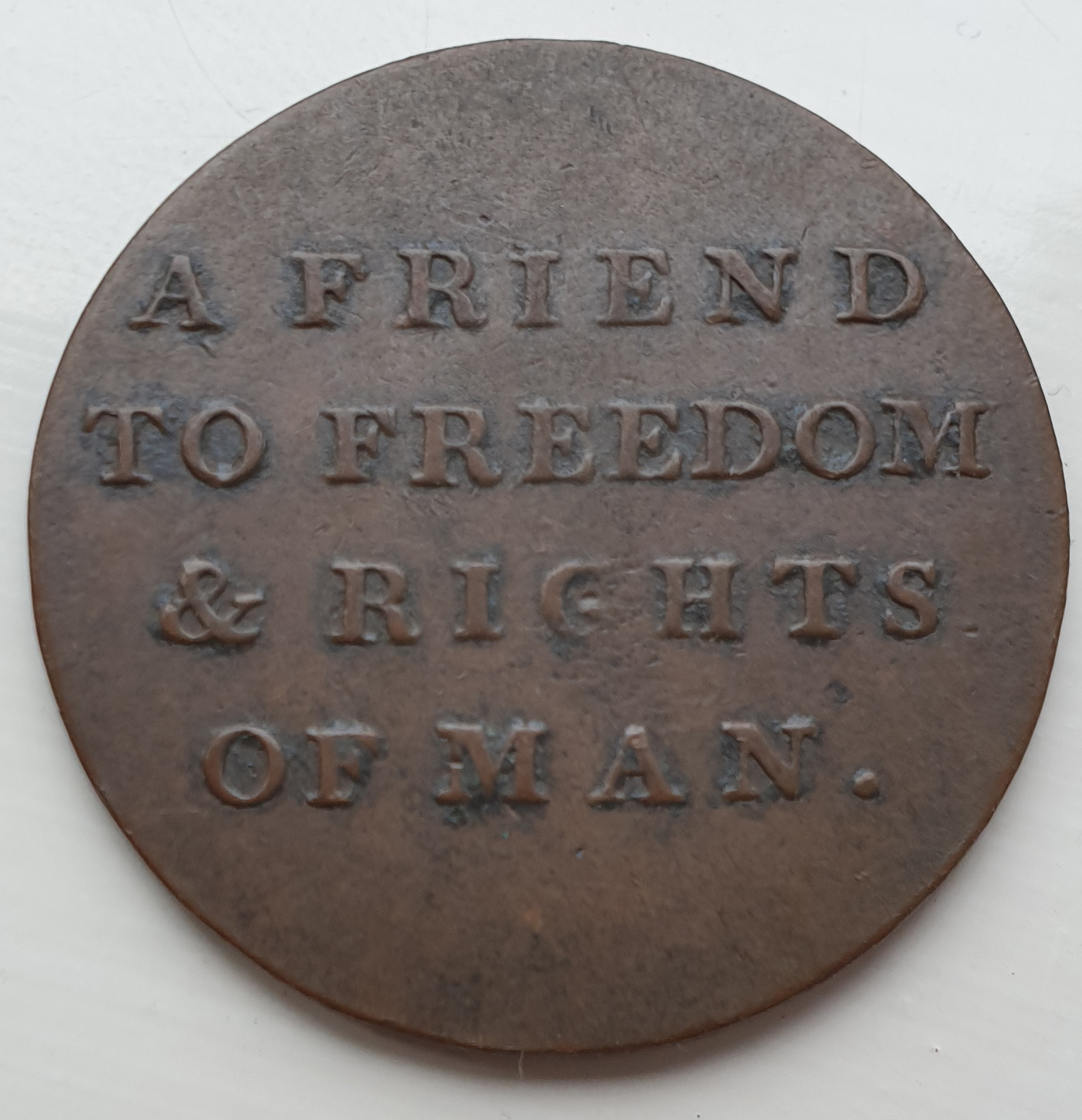 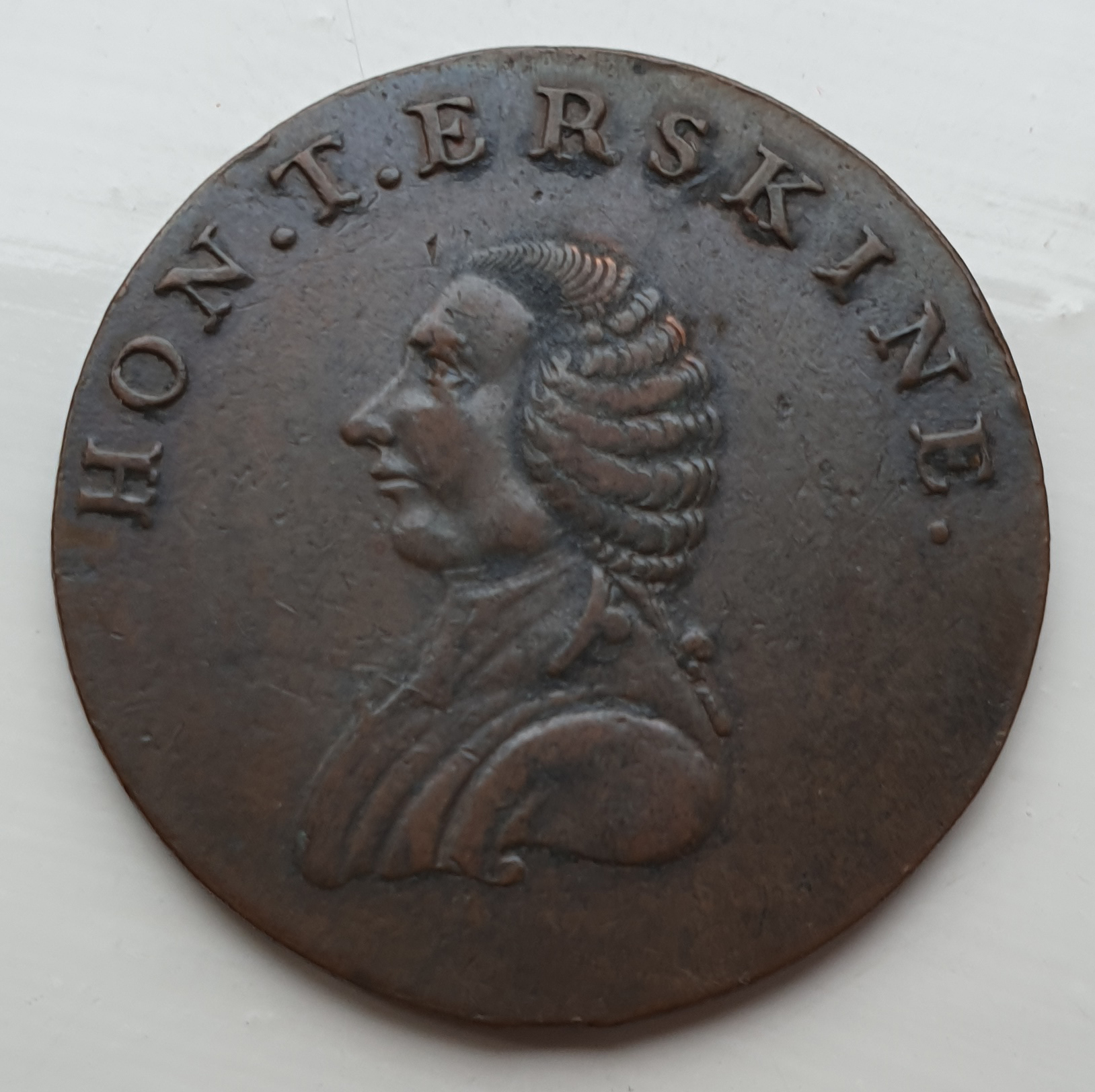 He and the other defending barrister are celebrated in a far more elaborate piece which depicts them holding scrolls reading respectively ‘MAGNA CARTA’ and ‘BILL OF RIGHTS’ with the legend ‘ERSKINE AND GIBBS AND TRIAL BY JURY’. The reverse lists the names of the nine defendants including Hardy and Tooke. 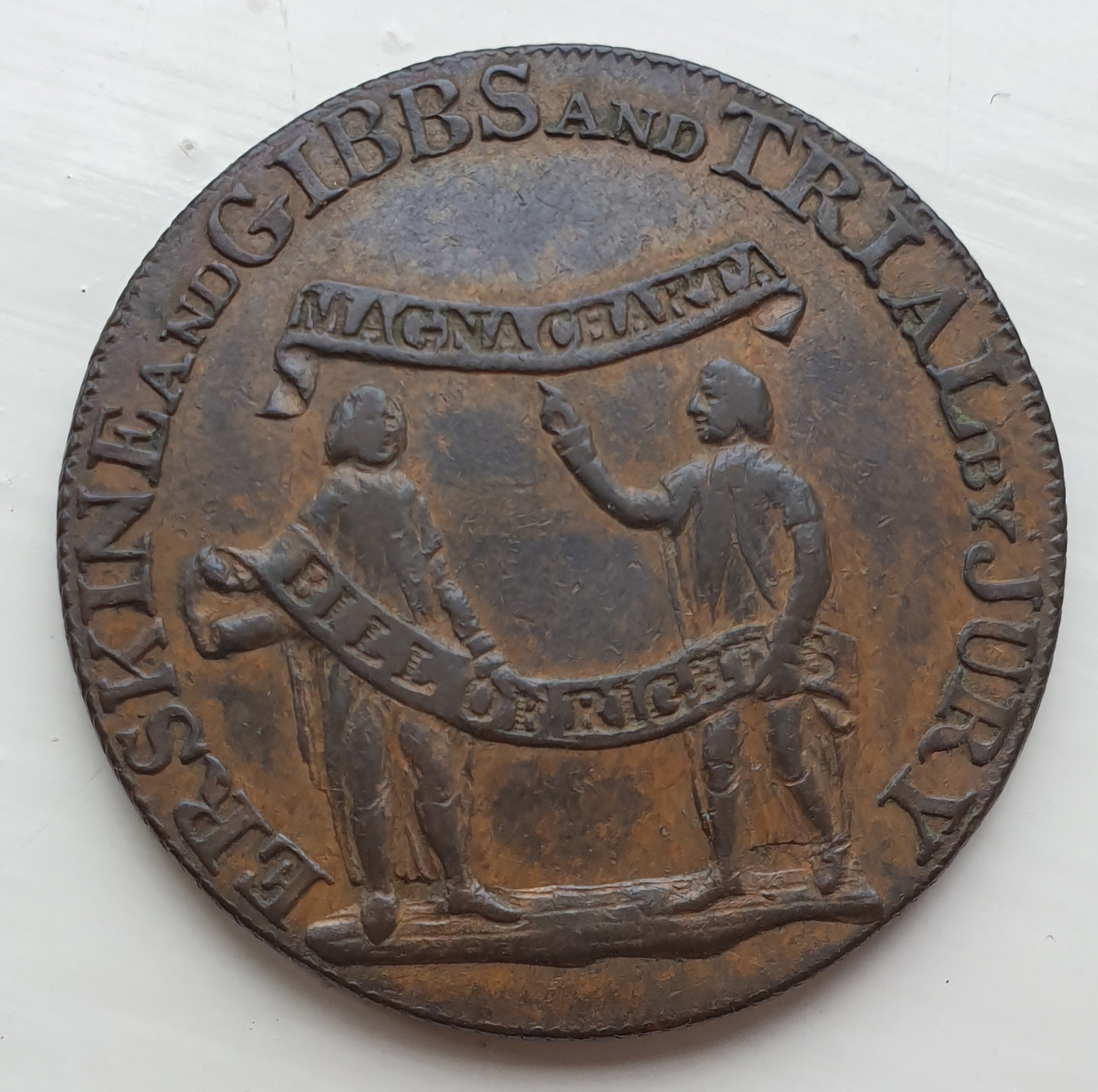 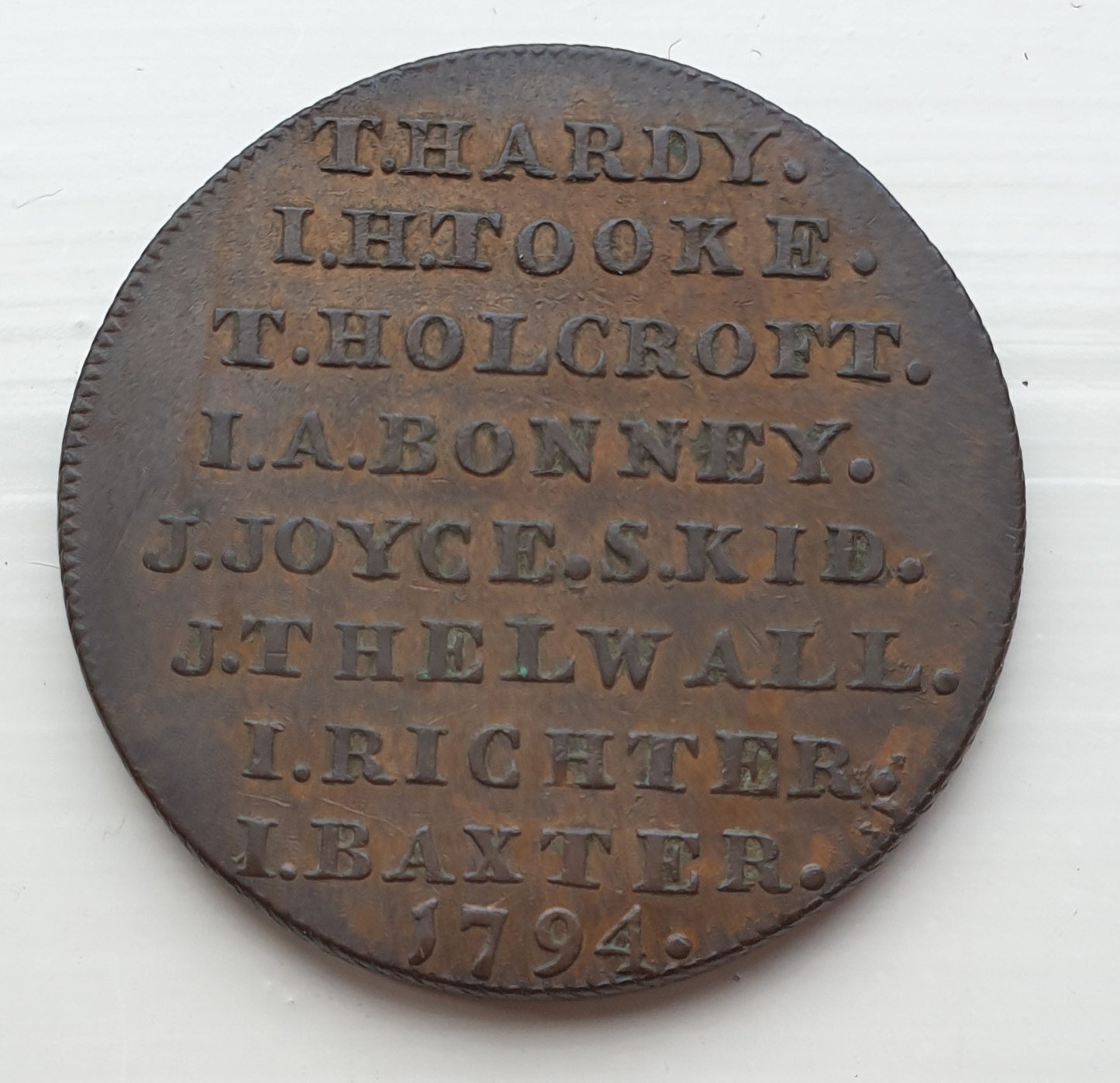 Fear of the French Revolution

The final pieces illustrated refer to the bloody goings on in France and a desire that history should not be repeated in Britain. First we have a token recording the execution of Louis XVI and his wife. Their conjoined busts appear on the obverse with legend ‘LOUIS XVI ET M. ANTOINETTE ROI ET REINE DE FRANCE’ and on the reverse ‘MURd BY THE FACTIOUS. LOUIS XVI. JAN.21. M.ANTOINETTE OCT. 16.1793’. 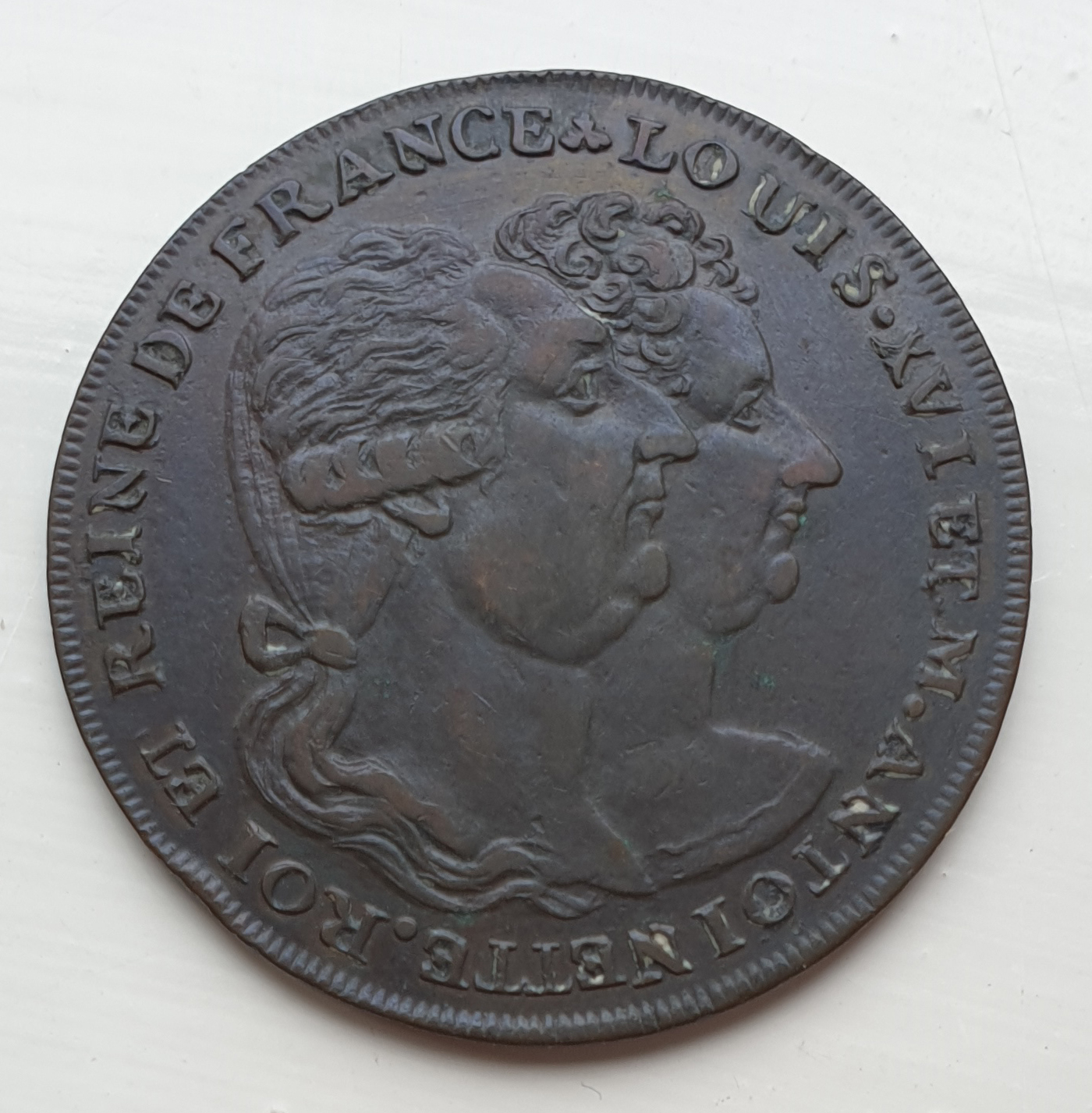 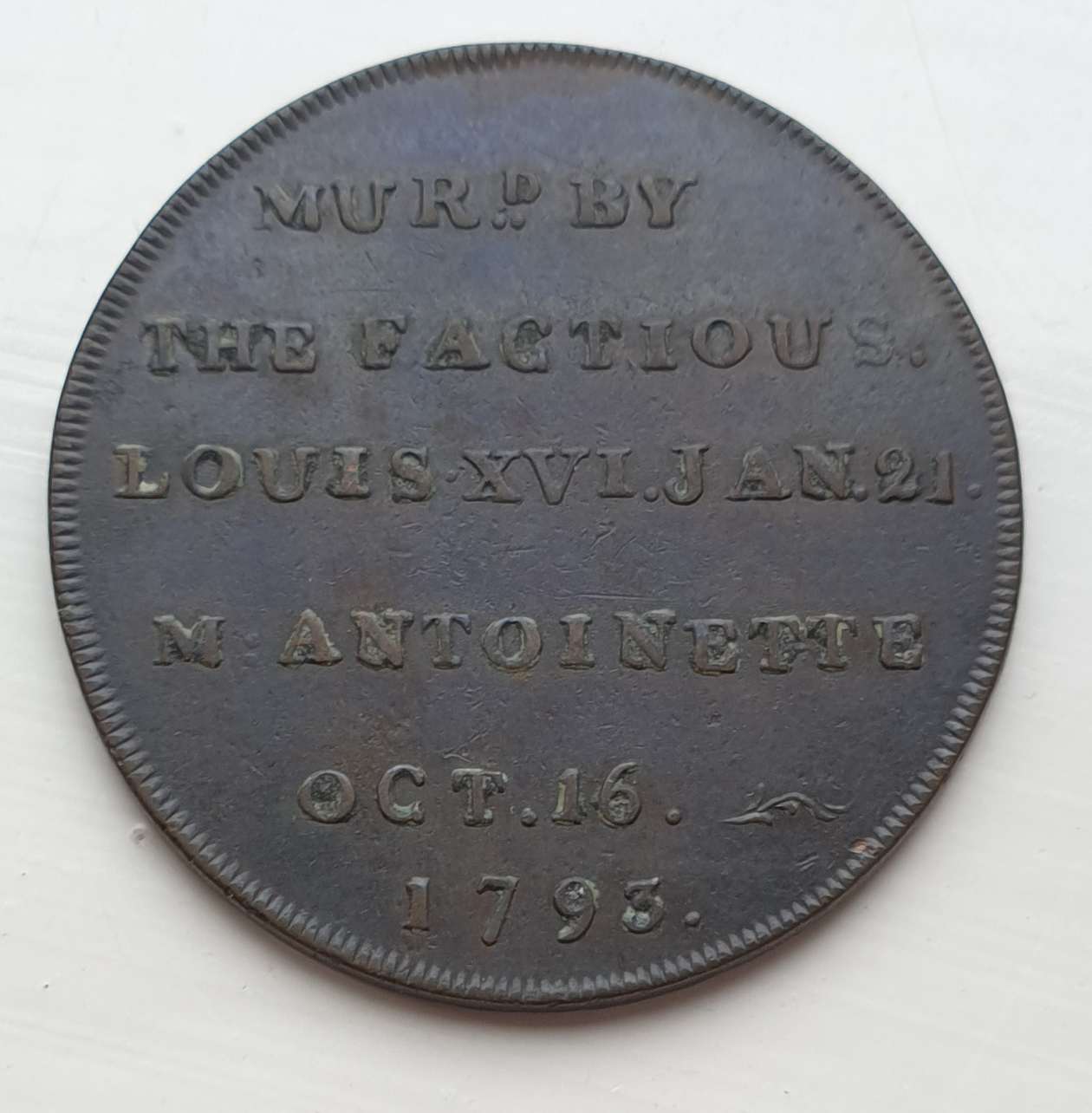 Bell’s detailed description of the final piece cannot be improved upon:

Obverse. The field is occupied by a square representing a map with the borders formed of daggers. In each corner is a dagger and the word FIRE. The heading is ‘FRA-NCE’ and beneath in inverted small characters is the word Throne, while a naked human foot couped at the ankle is placed upon the word ‘HONOR’. On the left of the map is the word ‘RELIGION’ and on the right ‘GLORY’ shaded with diagonal lines passing through the letters. Legend. ‘A MAP OF FRANCE 1794’ with the date upside down.

Reverse. An inscription in five lines superimposed on a star of thin lines and surrounded by a narrow border of oak leaves and acorns:

‘MAY GREAT BRITAIN EVER REMAIN THE REVERSE’… The map of France is shown as divided into factions and surrounded by daggers with fire in every corner. Naked feet trample upon honour, the throne is turned upside down, religion has been hacked to pieces, and glory diminished. Note the letters of the word become progressively smaller. The shading shows it has also been dimmed. The whole design represents the unhappy state of the country in 1794 when Robespierre and his party were in control. 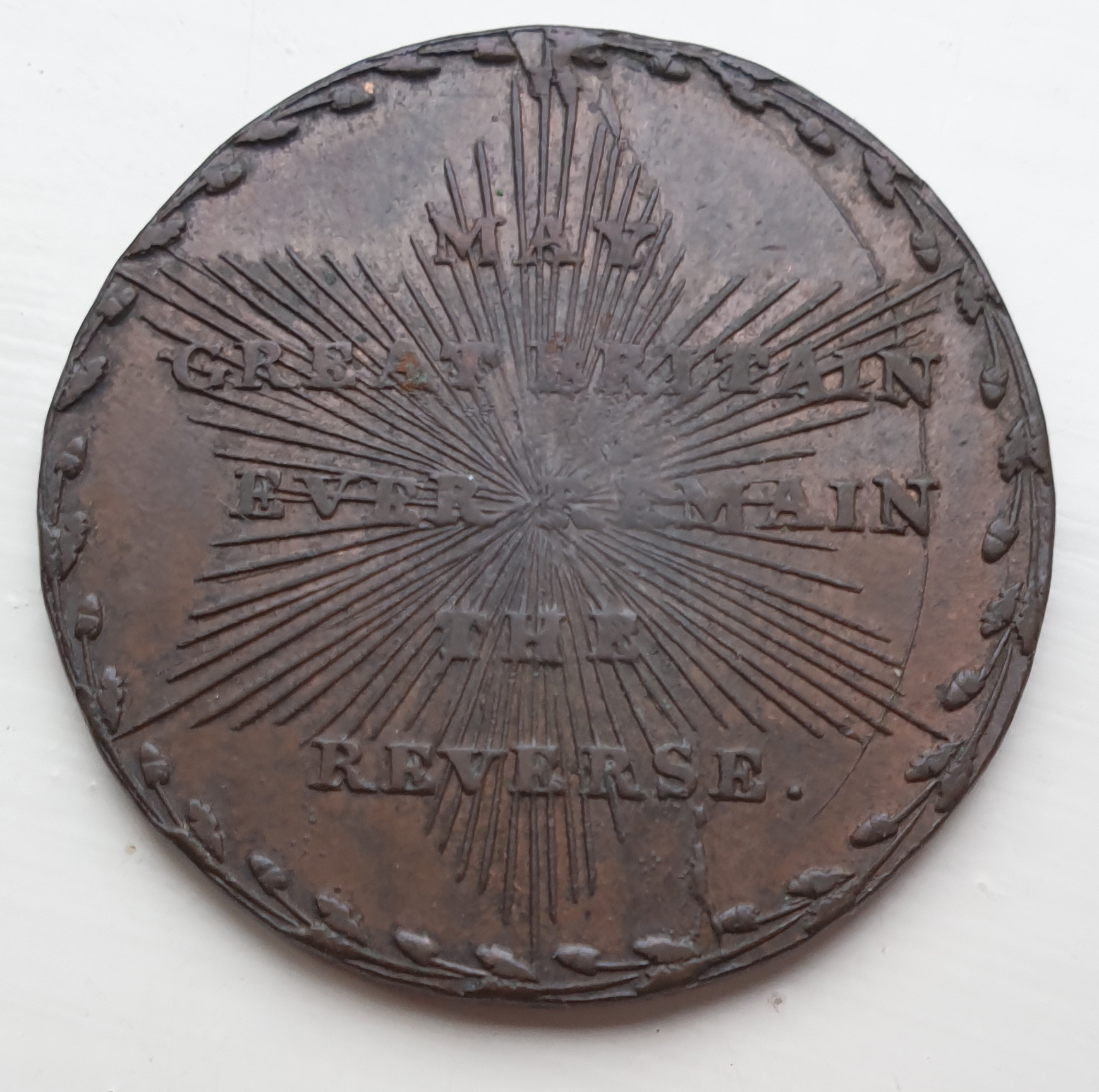 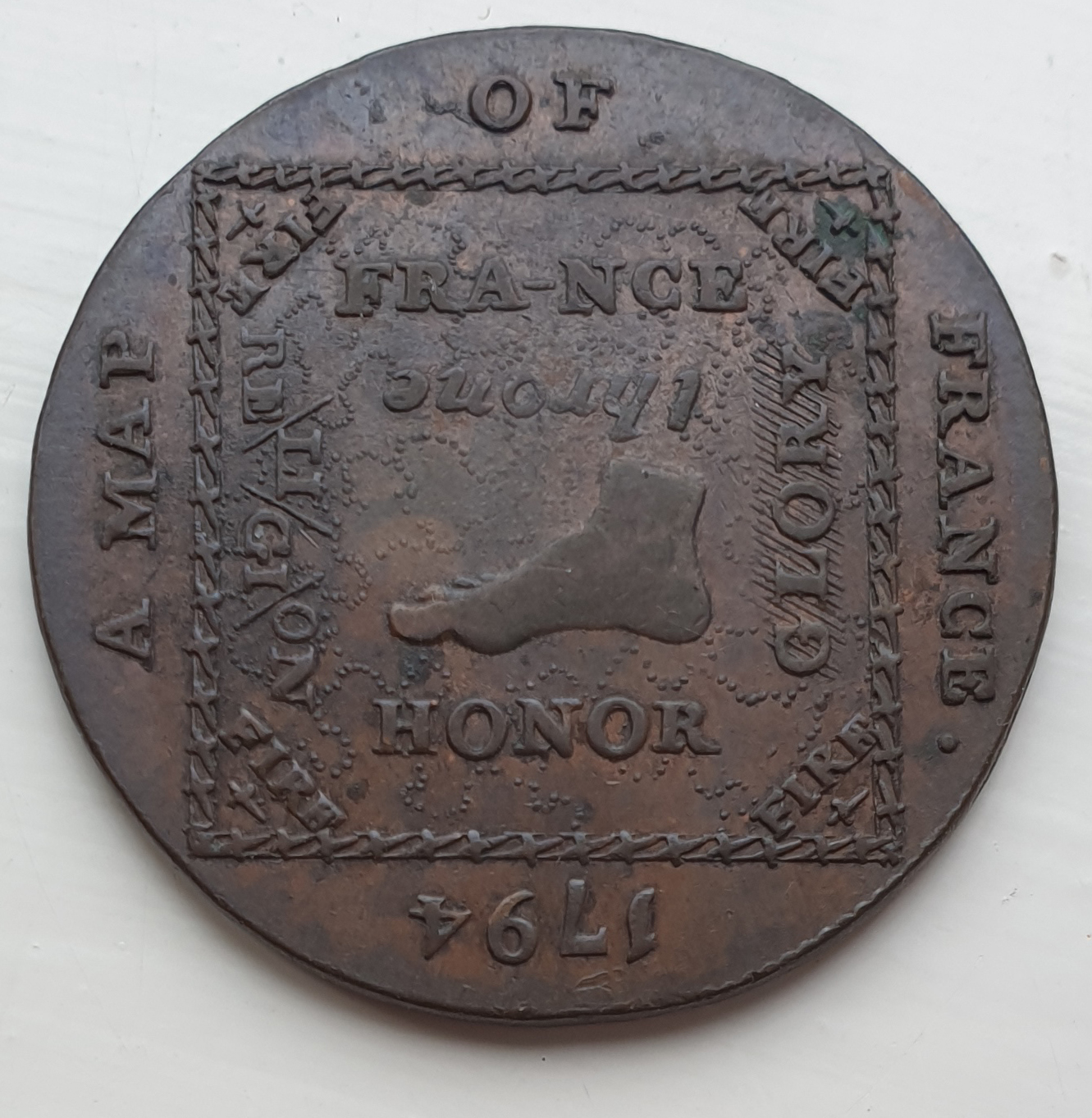 The reverse contrasts the state of the two countries; surrounded by a wall of oak (her navy) the star of Bethlehem shone over the land, and the inscription offers the pious hope that this happy state should continue.