An introduction to Byzantine coins In this brief introduction we detail the various coins of the Byzantines, the Greek-speaking Roman Empire of late Antiquity and the Middle Ages, who have a long and fascinating history to rival the Romans.

Most of us can dredge up a fact or two about Byzantium from half forgotten school history lessons.

We probably recall that the Roman Emperor Constantine I, who briefly visited York (Eboracum), transferred his official residence to a city on the Bosporus (in 314 AD), and that his supporters began to call it Constantinople in his honour.

It later became the capital of the Byzantine Empire.

Those Eastern Romans preferred to speak Greek rather than Latin, though they retained Roman inscriptions on their coins for centuries. They also favoured, and later officially adopted, Christianity over Rome’s pagan deities.

However, when it came to currency, they clung tenaciously to Rome’s gold coin, the solidus. It had first been introduced in Rome by Constantine I in 312 to replace the traditional Roman aureus.

Although not marked with any face value throughout its seven centuries of Byzantine mintage and circulation, the solidus was struck at a rate of 72 to a Roman pound of pure gold, each coin weighing 24 Greco-Roman carats, or about 4.5 grams of gold per coin.

It was to maintain its essentially unaltered weight and purity until the 10th century, though in the Byzantine economy it became known as the nomisma (plural nomismata), the ancient Greek word for money.

Whenever the coin was taken in by the treasury for tax purposes, it was melted down and quickly reissued. This maintained an evenness of weight in all solidi because each soft gold coin was protected from wear thanks to its brief period in circulation.

Although the Byzantine Empire opened scores of mints throughout the territories it held, lost, regained and lost again during its turbulent history, gold coin production was restricted to Constantinople, Ravenna and Carthage.

Solidi struck in the capital carried the mint mark ‘CONOB’ – CON the first syllable of Constantinopolis; and OB the abbreviation of the word obryzum (meaning refined gold) together with the Greek numeral 72. 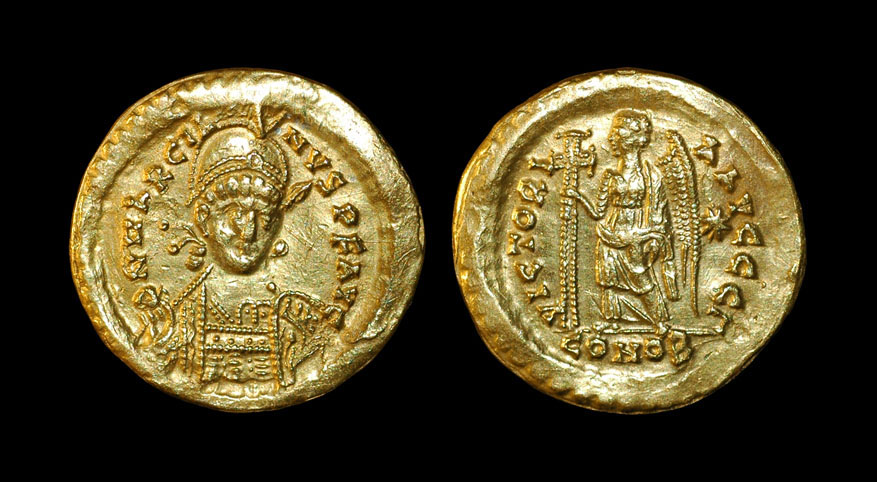 Solidus of Marcianus, minted in Constantinople circa 450.
Note the mintmark CONOB on the reverse.
Sold for £400 in 2010.

Gold coins struck at Ravenna and Carthage can only be differentiated when they display well-marked local characteristics, normally a high, annular border at Ravenna, and small, thick flans at Carthage.

The empire, which witnessed the fall of Rome to barbarians, was to survive, greatly diminished, almost up to the time of Columbus’s voyage to America.

Of course the Byzantines inevitably experienced military defeats and economic setback, but with huge wealth emperors could placate enemies on their borders with gold.

A different approach to coin design

With only a few exceptions Roman emperors in the west continued to issue coins bearing profile images.

The Byzantines broke with that tradition from the outset, preferring front-facing, or three-quarter facing images on the full solidus, though on the majority of their two fractions of the full coin – the semissis (half-solidus) and tremisses (third-solidus) – profile portraits continued.

The eastern emperor was also usually shown in armour and carrying a spear.

Your guide to Roman coins

On the reverse Christian iconography made an early appearance, usually a cross supported by a standing figure of Victory or an archangel.

The emperor Justin II (565-578) opted for a seated Victory-like figure personifying the city of Constantinople; but his successor, Maurice Tiberius II (578-582) altered the solidus reverse to show a cross surmounted on steps. This was said to commemorate a ceremony from almost a century earlier when the emperor Theodosius II (408-450) had erected a giant jewelled cross at Golgotha near Jerusalem.

In the seventh century, Byzantine emperors introduced a number of major changes to the imagery on their gold coins.

Whereas previous emperors had made little attempt at true likenesses of themselves on obverses, the fashion now altered in favour of recognisable portraits. At the same time coins were used as vehicles to promote dynastic succession.

Emperors depicted themselves accompanied by the son or sons they had named as future occupants of the throne. 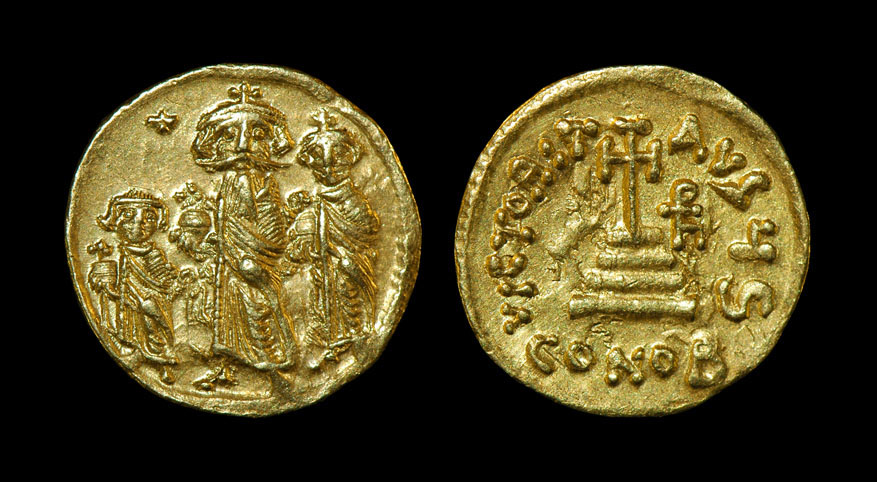 Solidus of Heraclius minted in Constantinople circa 632.
The emperor is depicted with a long beard, and with his beardless sons alongside.
Sold for £200 in 2010.

Another innovation witnessed the more frequent use of a cross as the reverse design, with its type indicating the coin’s value.

Thus, a cross on steps appeared on the full solidus; a cross surmounting a globe indicated a gold semissis; a simple cross signified a tremissis. 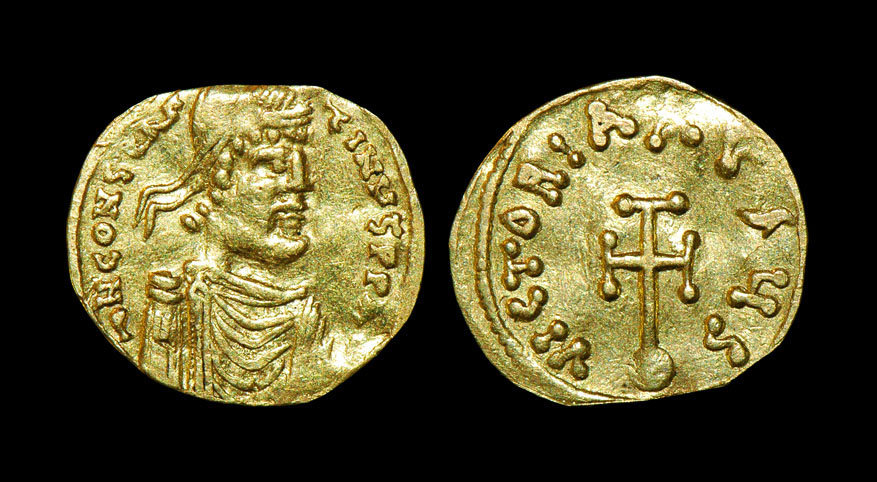 Semissis of Constans II. The cross potent on a globe depicted on the reverse indicates the coin’s denomination.
Sold for £120 in 2010

And when the emperor Justinian II (685-695 and 705-711) decided to place a bust of Christ on the obverses of his gold coins he removed himself to the reverse where he is shown full length and holding the cross appropriate to the denomination.

The widespread use of images of religious figures disturbed some leaders of the Byzantine Church. In the 8th century they encouraged a succession of rulers now referred to as the Iconoclast Emperors (iconoclast is Greek for image breaker) to impose bans on icons. 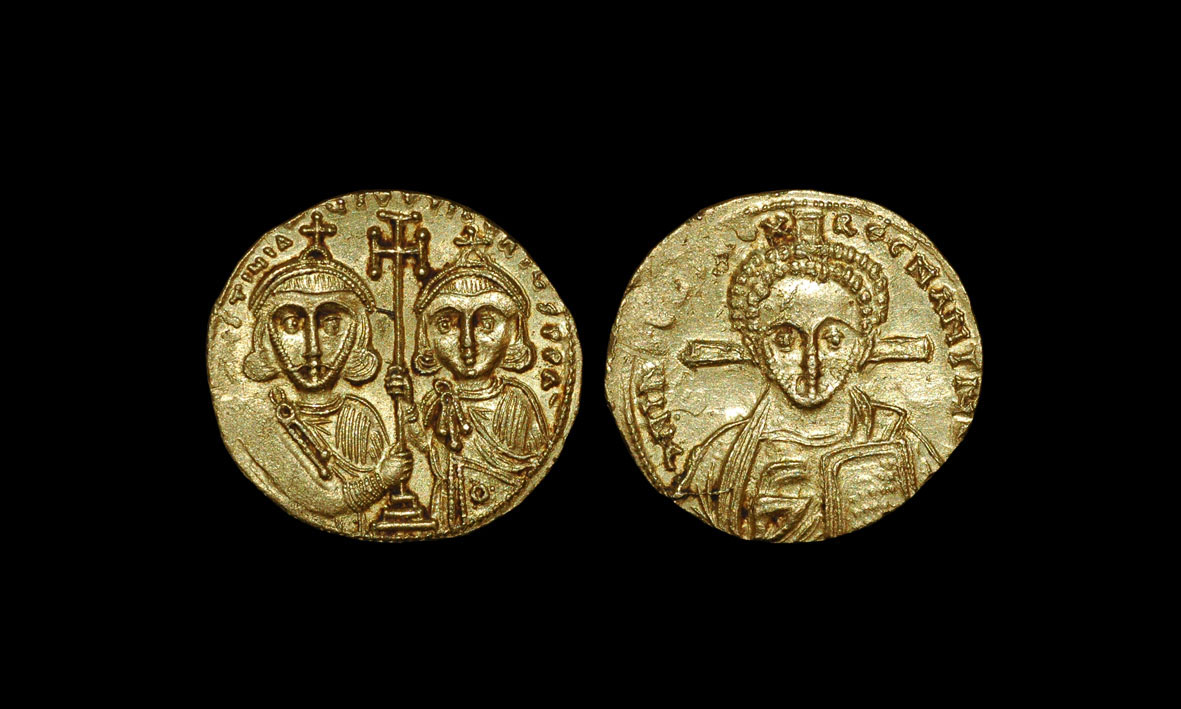 Solidus of Justinian II and Tiberias minted in Constantinople circa 705.
A bust of Christ occupies the obverse of the coin.
Sold for £700 in 2010

On coins of the period the bans are reflected in an end to realistic portraiture; emperors are now depicted in very simplistic linear forms and holding small crosses. Also Christian symbols on coin reverses were replaced by yet more outline images of the emperor’s dynasty.

The other major change of the 8th century witnessed the elimination of the semissis and tremissis.

In the 9th and 10th centuries, with the Iconoclasts ousted, religious images as well as imperial portraiture again featured on Byzantine coins. From the reign of Michael III (842-867) a bust or a seated figure of Christ became the usual obverse for a solidus, with the reverse often taken up by realistic portraits of the emperor or members of his family.

Gradual debasement of the coins

Regrettably the 10th century also witnessed the first reduction in the weight of Constantinople’s gold coins when the emperor Nicephorus II Phocas (963-969) decided to balance his accounts by issuing a marginally lighter gold coin which at first looked little different from its predecessor, though it came to be called tetarteron (meaning lacking a quarter). 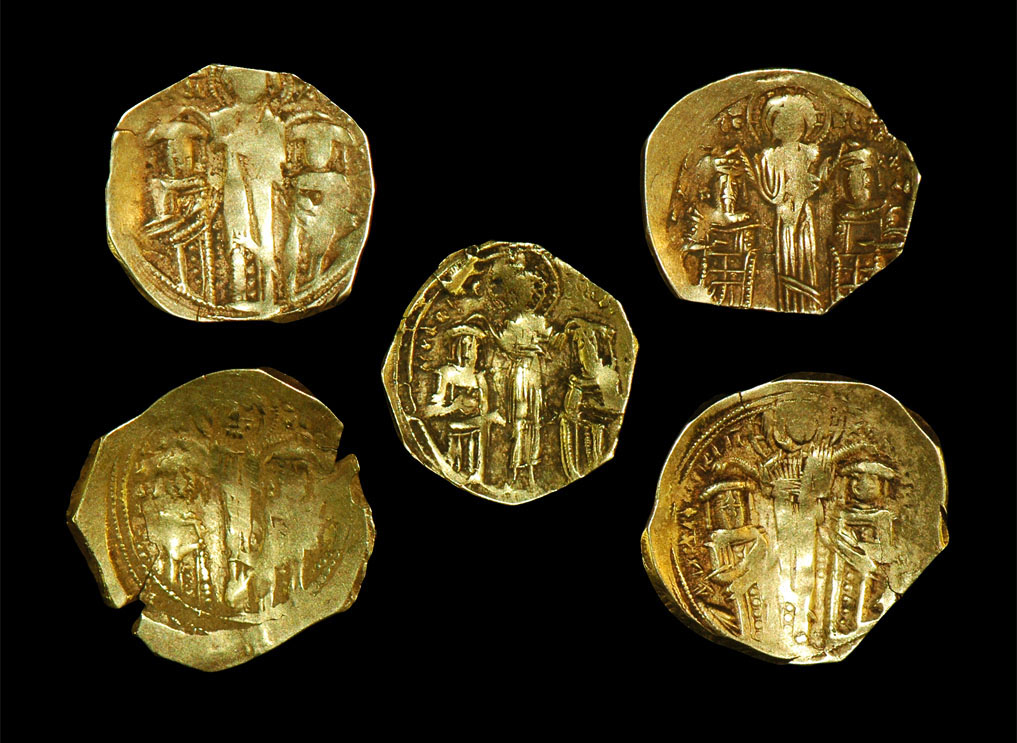 Group of five concave coins of Andronicus II and Michael IX minted in Constantinople between 1295 and 1320.
Obverses depict Mary within the city walls, while on the reverses (shown here) Christ crowns the emperors.
Group sold for £500 in 2011.

Debasement followed weight reduction, and led inevitably to the loss of all Byzantine gold coins of the purity first established by Constantine I at the empire’s birth in the 4th century.

The decline is perhaps most strikingly seen in the coins of Constantine IX (1042-1055) who introduced histamena so thin they had to be struck in concave shape in order to strengthen the thin metal and prevent the coins bending while in circulation.

With more than eighty emperors and a history so colourful that Rome pales in comparison, this is a collecting field offering huge potential for beginners and advanced collectors alike.

Your quick guide to Celtic coins