Your guide to the Alan Turing 50p The Royal Mint issued a 50p to celebrate the life and work of Alan Turing, the ‘father of computing’ whose achievements range from formulating ground-breaking theories in the fields of mathematics and biology to ingenious codebreaking during the Second World War. Find out more in our coin guide.

The new 50p was designed by Matt Dent and Christian Davies, and the reverse side of the coin features the British scientist’s name alongside a representation of the Bombe machine used during the Second World War.

In a special nod to his work, the designers have incorporated hidden word sequences as part of the 50p design, representing a Turing quote and significant location, as well as the designers’ initials.

Hidden codes on the coin

Look closely and you will see that the coin features a what3words address – ///gears.grin.than – which pinpoints the location of his alma mater, Cambridge University. 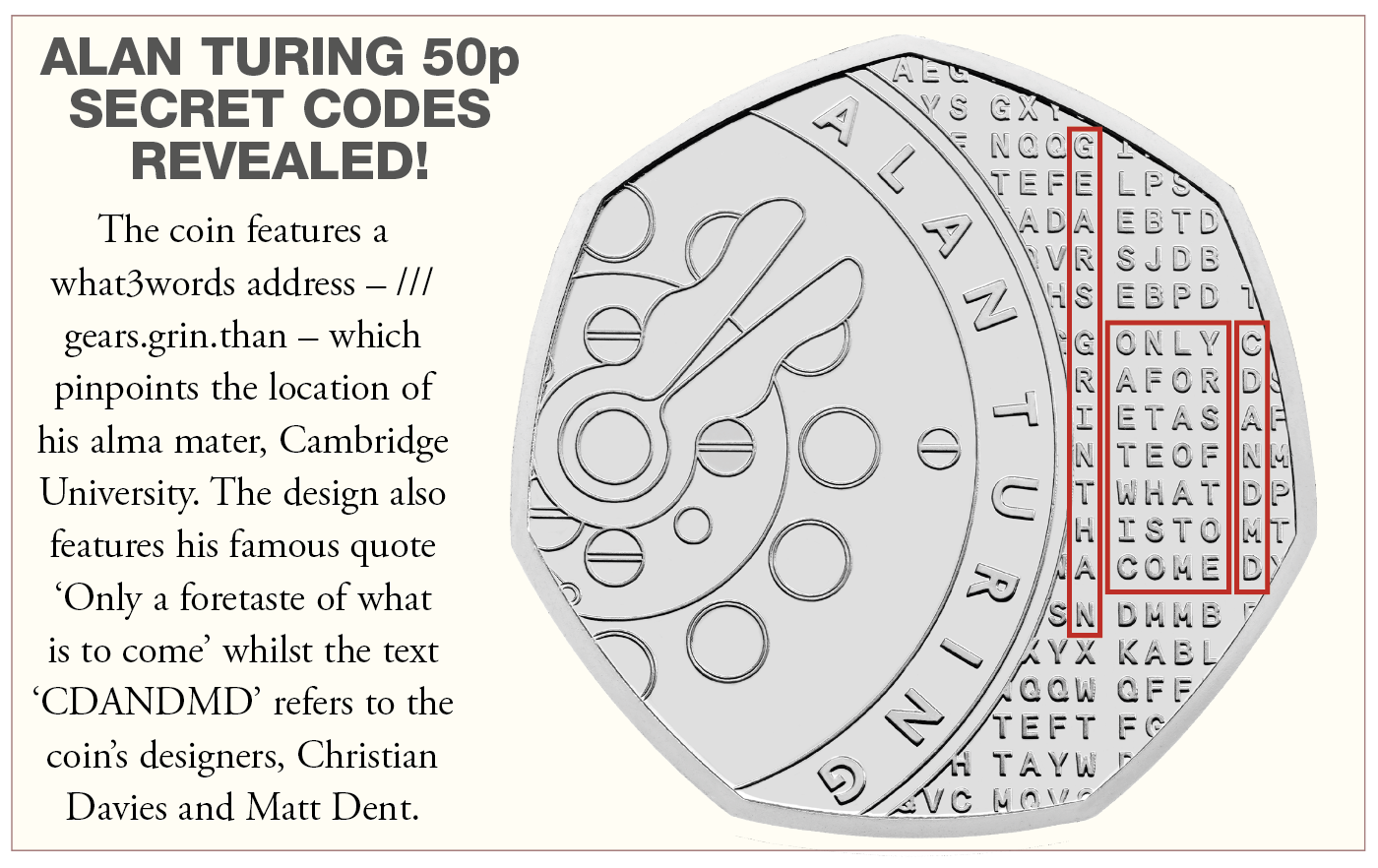 The what3words system has divided the globe into a grid of 3m x 3m squares and given each one a unique combination of three words: a what3words address. This means that people can accurately and easily communicate their exact location.

The design also features his famous quote ‘Only a foretaste of what is to come’ whilst the text ‘CDANDMD’ refers to the coin’s designers.

Will the coin be rare?

The Alan Turing coin is the final release in the Innovation is Science 50p series, which also recognises:

All the coins in this series have been issued as Brilliant Uncirculated coins and were not entered into general circulation, so it is not very likely that you will find one in your change, instead you'll need to purchase the coins from The Royal Mint or from other coin dealers or collectors.

The Brilliant Uncirculated coin has an 'unlimited' mintage, so it is not likely examples of the coin will go up in value any time soon. The coin retails at £10 from The Royal Mint, and so this is the value and the coin is not rare.

As the father of modern computing and a codebreaking genius during the Second World War, Alan Turing was a truly extraordinary individual.

In recent years, Turing has become a figurehead for gay rights following his posthumous pardon from Her Majesty The Queen in 2013, which has since led to further pardons to gay men and created what’s become known as ‘Turing’s Law’.

For a man who passed away far too young, Alan Turing’s ingenuity and intellect both still have an enduring impact in the fields of computing, mathematics and science today. His groundbreaking theories remain revered to this very day, which suggests he was a genius way ahead of his time.

Recently honoured by the Bank of England with a portrait on a new £50 banknote, this is the first UK coin to commemorate the life and legacy of Alan Turing.

Discover the coins of CIT