Coins from the Kingdom of Macedon Some beautiful examples of coins from Macedon recently went under the hammer in auction houses around the world. Discover the prices paid and the story of this ancient kingdom in our quick guide.

This beautiful Alexander the Great (336-323 BC) gold stater recently found a new home thanks to the recent MDC Monnaies de Collection e-auction. The 17.5mm gold coin was described as being ‘Very Fine to Superb’ example of this piece from the ancient Greek kingdom of Macedon.

Also from the ancient kingdom of Macedon, this Philip III Arrhidaios (323-317 BC) stater, was offered by A.H. Baldwin & Sons.

From the mint of Kolophon, c. 322-319 BC, the coin features a laureate head of Apollo, with the facial features of Alexander the Great, facing right. The reverse shows a charioteer, holding reins and kentron, driving Biga right, tripod below horses.

The London auctioneers called the coin ‘a marvel of Hellenistic die engraving’ and explained that:

'This coin… stands out from the rest. The dies used to strike this particular gold stater have been engraved with exceptional skill, resulting in a familiar-looking portrait… The portrait of Apollo we see here has, remarkably, been modelled on Alexander the Great’s.’ 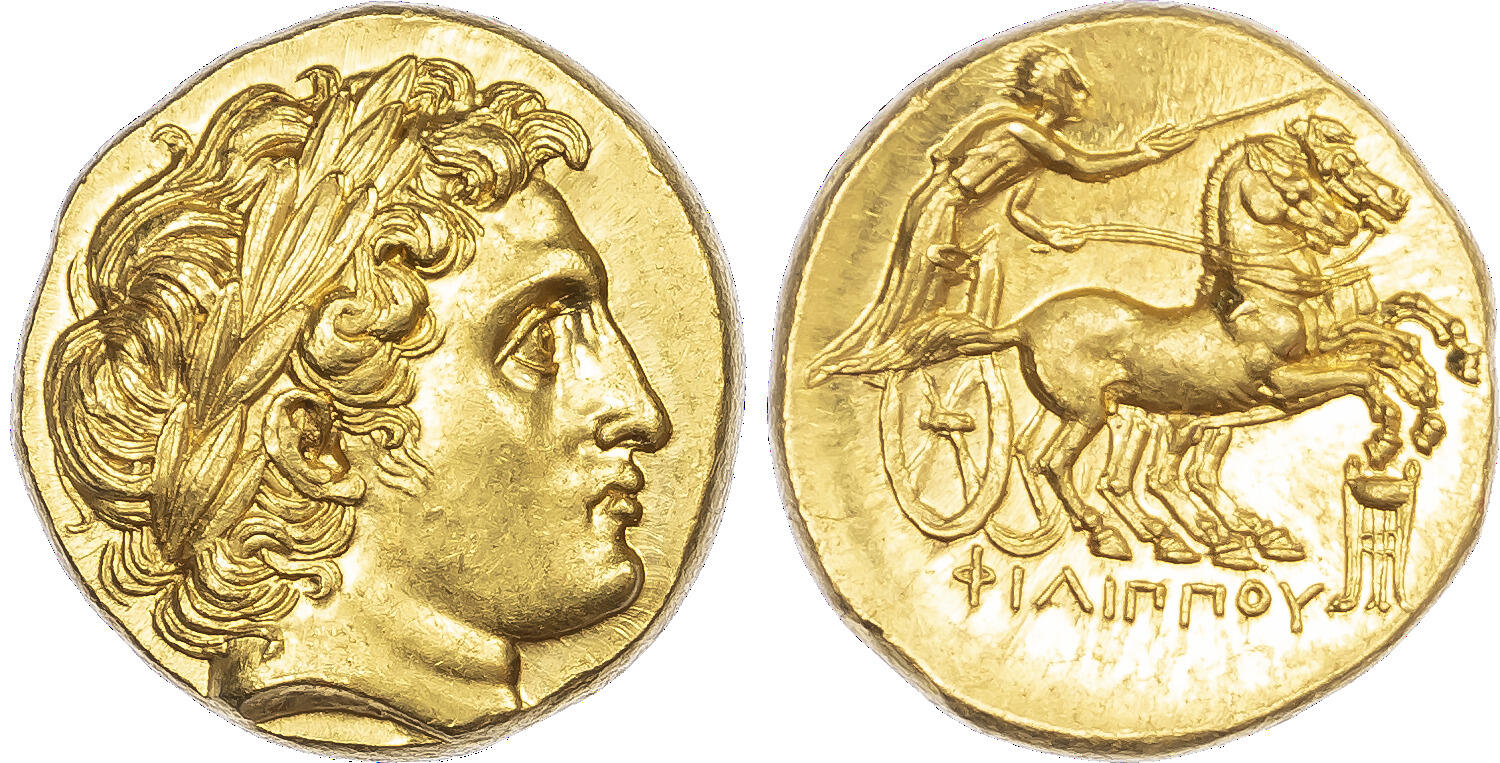 At one time, the kingdom was the most powerful empire in the world and the centre of Greek civilization.

The kingdom gained this power and influence thanks mainly to Alexander III of Macedon, better known as Alexander the Great. He was a brilliant military commander, and after years of campaigns helped stretch the borders of the Macedonian Empire as far as India.

As such a well known and influential leader, Alexander the Great is seen on many coins of the period. Like many of the rulers of the period, Alexander was viewed as an ancestor of the Gods, and this divinity is also reflected on coins, such as the 'Horns of Ammon' – a symbol of divinity – which he can be seen wearing on many coins.

Alexander's death in 323 BC saw the Macedon army become less well organised, and eventually the kingdom became overshadowed by the growing Roman Empire.

By 168 BC the Macedonian monarchy was replaced by Roman leaders, and gradually the power was transferred to the Romans, with the region becoming a Roman province.

The region continued to form part of the Eastern Roman Empire until the end of the 14th century.